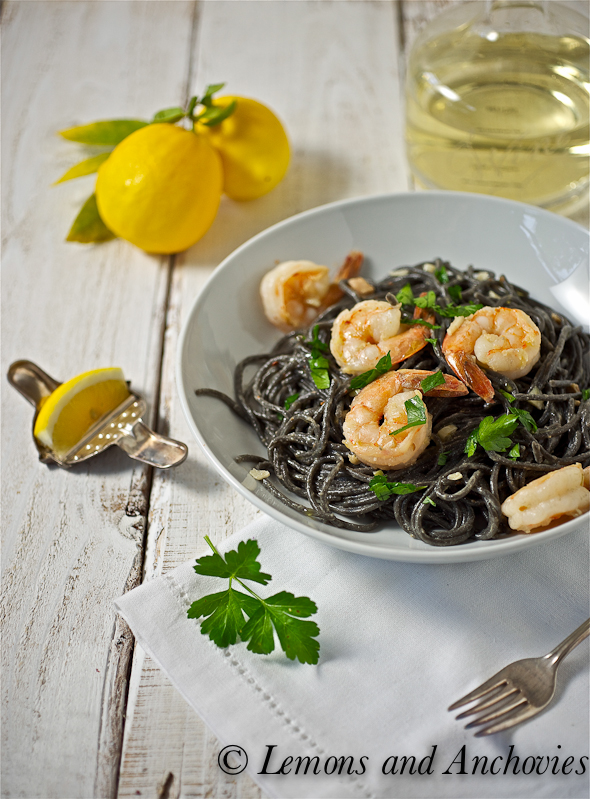 Dining in Buenos Aires is like dining in any other major city in the world–the options are plentiful.  There is no denying the superior beef my travel companions and I sampled during our visit but to assume that the city’s top offerings are limited to grilled meat is not entirely accurate.  I say this with a finger pointed at me.  Not quite knowing where I picked up this impression, I carried it to Buenos Aires with me for no reason other than sheer ignorance but I was happy to discard it as soon as I began to taste what the cosmopolitan city had to offer.

Case in point?  Buenos Aires fed my current obsession with all dishes featuring squid ink.  One of my favorite dishes prepared by my mother was adobong pusit (ah-doh-bong pooh-sit), the traditional Filipino preparation of cooking meats in vinegar, but rather than the typical chicken or pork, squid is the featured ingredient.  The meat is cut crosswise, sometimes left whole, the cartilage removed and the ink sack collected.  Then it is simmered in vinegar and the ink.  It is a simple dish–at least my mother made it look so–but I have never tried making it myself.  There are some foods I grew up eating that I am afraid to try out of fear that I would not do justice to my mother’s version.  This is one of them.  Black, rich and deeply flavored, pusit, as it is called for short, tastes more than just of the sea.  Squid ink imparts a complex flavor that I can’t quite describe but there is no denying I am in love with it. 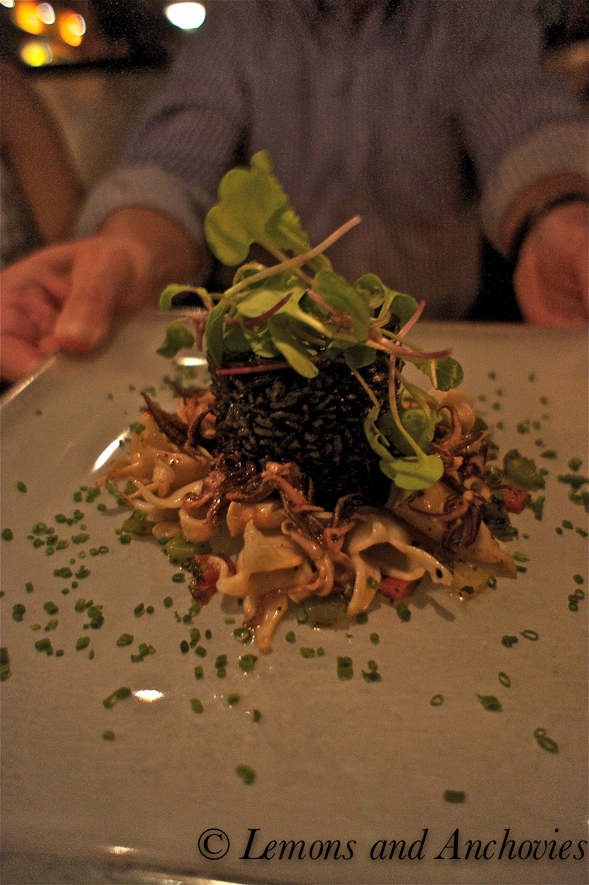 On our third night, we secured a reservation at Osaka, a Peruvian-Japanese restaurant in the Palermo-Hollywood barrio of Buenos Aires.  Hip and alive, the neighborhood was hopping with a younger, trendy crowd.  Osaka’s menu was generous in its offerings, traditional Japanese sushi and gyoza saluting Peruvian tastes and Peruvian favorites nodding back with Japanese flavors.  My friends and I opted to have dinner tapas-style, selecting our favorites from the menu to share with everyone.  I took a picture of the menu so I could accurately describe the dishes when the time came (as in now) but my pictures did not deliver.  I’m only mildly disappointed, however.  As soon as I spotted the Arroz Negro con Calamares my vision blurred at the other items on the menu.  I had the honor of the first taste and unlike the disorganized service which marred just a bit our dining experience, the arroz negro didn’t disappoint.  Would it be bad of me to say that I wish I had the entire plate to myself?  Just being honest. 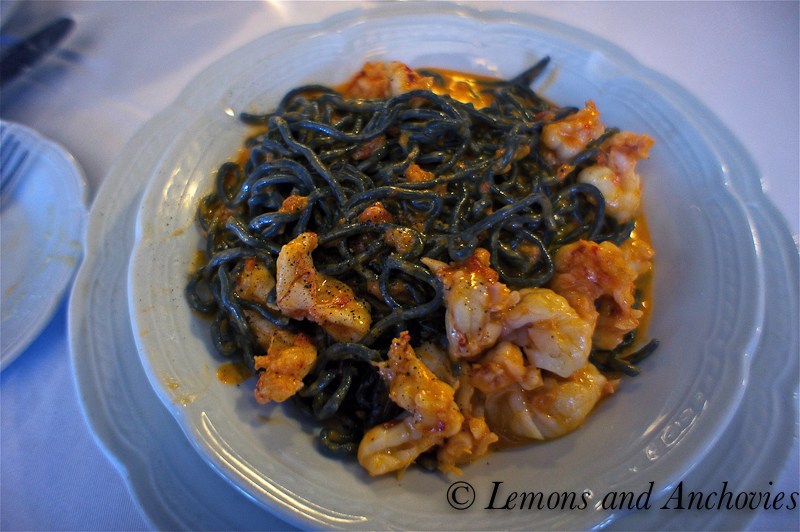 On our last day in Buenos Aires, before moving on to Mendoza, the nation’s wine capital, my friends and I had lunch at Sottovoce on Avenida del Libertador.  This was our first departure from Sylvie, our tour guide’s recommendations, but it turns out we made a good call, too.  Sottovoce is an Italian restaurant (sotto voce means whisper or under the breath) and specializes in pasta and fish.  The stuffed pasta is made on the premises while the dried pastas are provided by a pasta factory.

Sottovoce is a white-tablecloth establishment but the atmosphere is not at all stuffy.  Bread, slices of mortadella and other small bites were promptly set before us as we perused the day’s offerings.  My husband quickly selected a pasta with simple tomato sauce topped with fresh arugula, a friend ordered the stuffed pasta of the day, still another the lasagne alla bolognese while another, the pasta with anchovy sauce.  Me?  I invite you to guess.

As it was at Osaka, so it was at Sottovoce.  As soon as I saw the Spaghetti Nero con Gamberi, I put down my menu.  I am often disappointed by shrimp dishes because most of the time flavor is hugely lacking.  In this case, the shrimp tasted the way they should and were perfectly cooked.  But it was the pasta I was after.  The spaghetti had the squid ink essence I like so much and it was highlighted perfectly by the shrimp and sauce.  As is customary when dining with our close friends, we had a taste of each other’s dishes but I won’t deny that I was very happy to have the bulk of my squid ink pasta to myself. 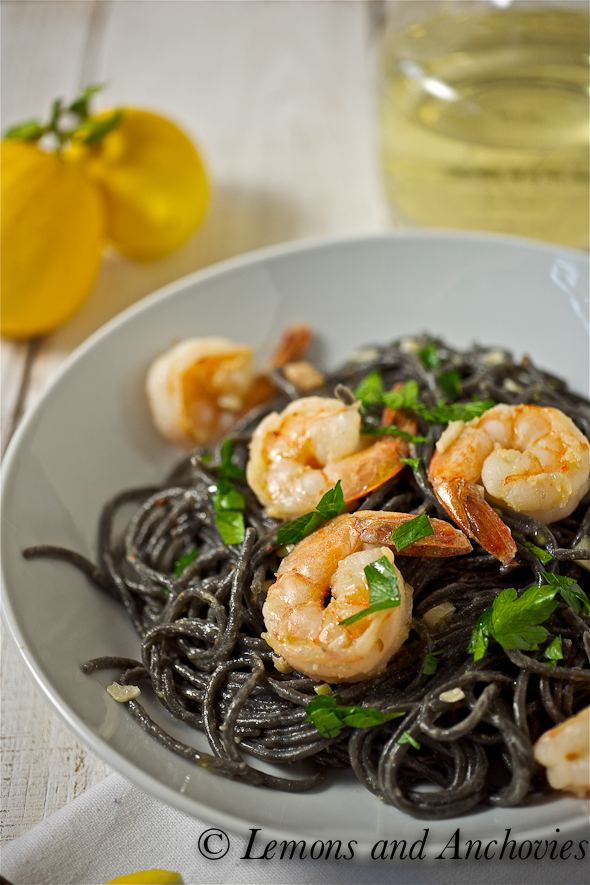 In order to keep my squid ink love alive, I vowed to finally try my mother’s adobong pusit upon returning home.  However, it has been a month and I have not yet mustered the courage to deal with fresh squid and to collect the ink sack myself.  As a compromise, I attempted to recreate my pasta dish from Sottovoce.  I didn’t get around to asking for their recipe but my version proved just as satisfying.  The white truffle oil didn’t hurt either.  Next time, I’ll make my own squid ink pasta. 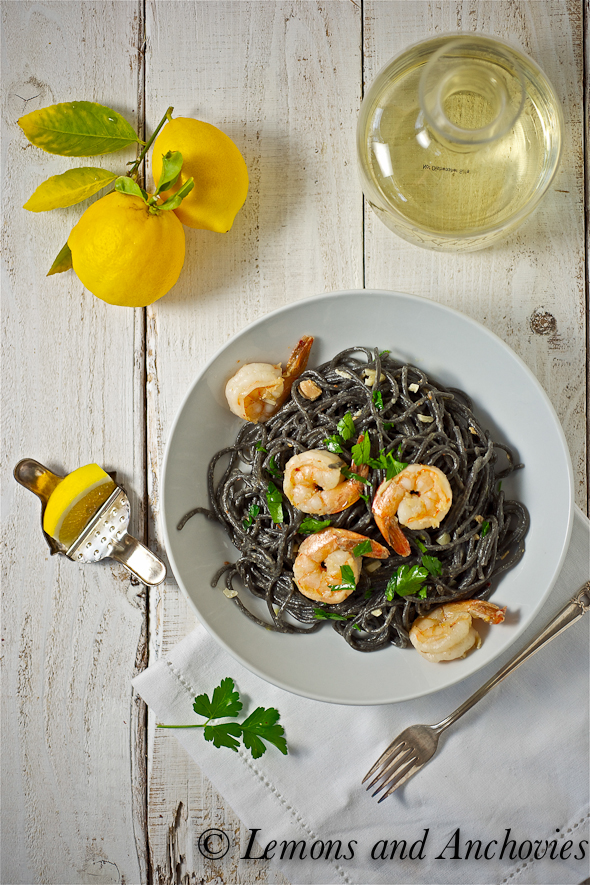