It seems you either love squid ink or you don’t. If you’re in the former camp this arròs negre, loaded with shrimp and calamari, could just become your go-to recipe. 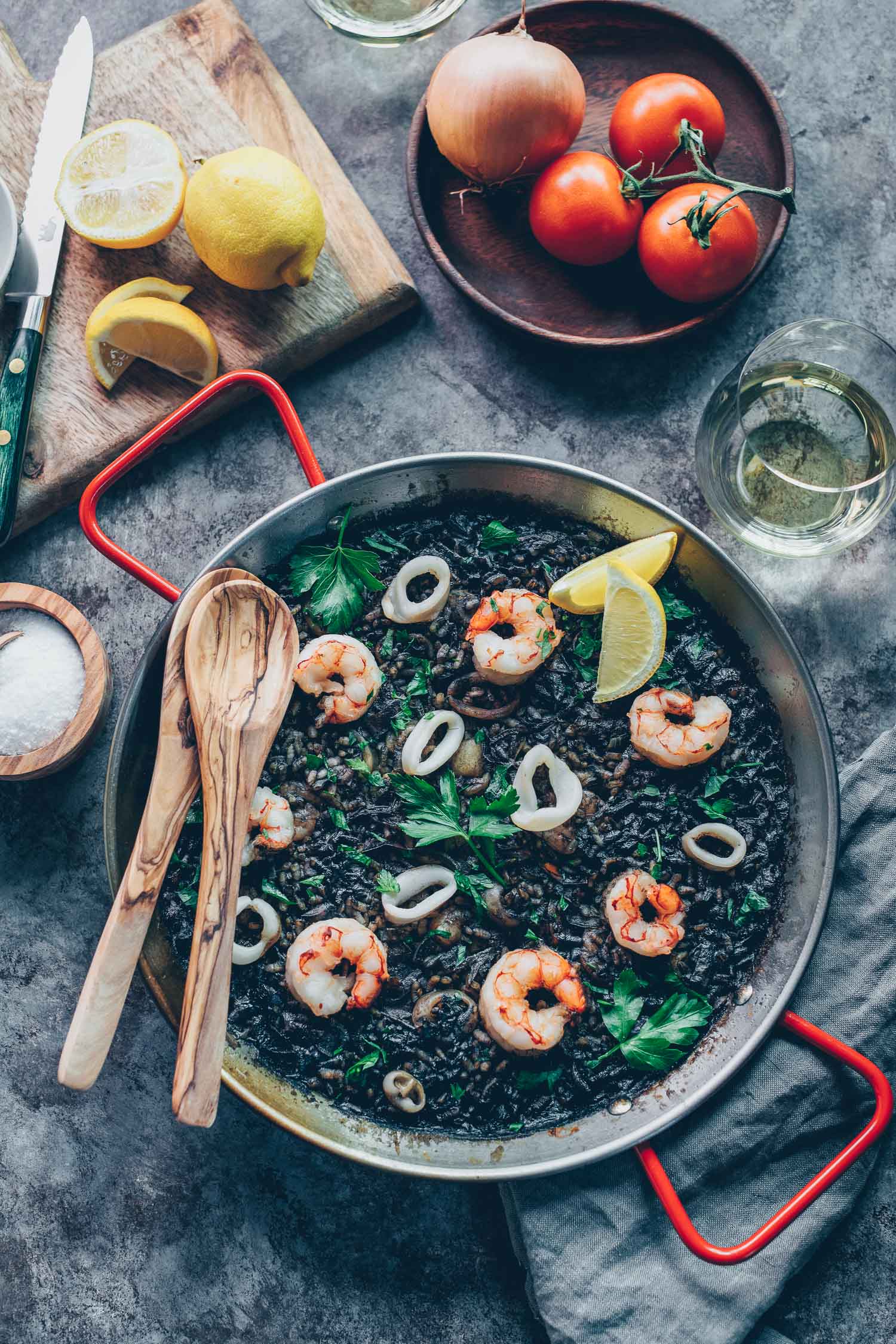 At a dinner party recently, encouraged by our friend’s casual, relaxed entertaining style, this reluctant hostess (*raising my hand*) declared that she would host a paella party soon. The following day I realized what I had committed to.

See, at the thought of being in charge of feeding a crowd, panic wells up inside me. Four to six people, no problem. More than that and I begin to worry. It’s silly because the gatherings we’ve hosted in the past seem to have been well-received and everyone leaves stuffed (because I tend to double or triple the food-to-guest ratio). The stress comes from trying to figure out what to serve for the main course–will everyone like this or that? What dietary restrictions must I consider?

I know I’ve inherited the entertaining anxiety gene from my mom and for years I’ve tried to conquer it by making a point to commit to having people over, to not overthink the matter. Looking back on gatherings I’ve attended, they’ve not always been perfectly executed but the hosts never lost sleep over the hiccups–so why do I worry so much? Apparently, my subconscious decided it was time for another dose of entertaining therapy.

Paella party it will be. 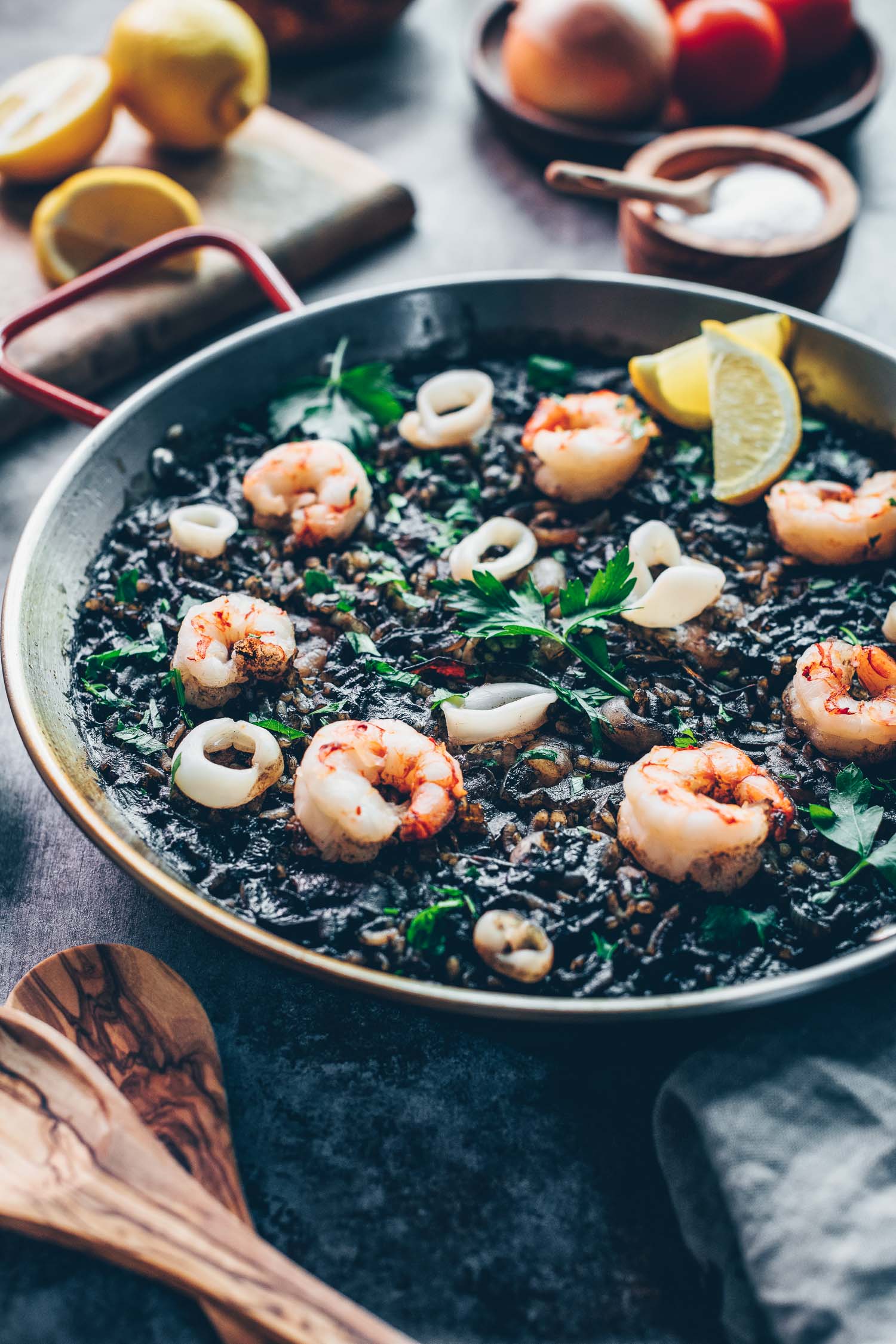 Really, this party should be fun. It will be a paella cook-off of sorts–not for judging each other’s skills (though there might be some of that made in jest) but mainly to distribute the labor. There are paella “specialists” in the group so we’ll prepare a few in my kitchen and sample different flavor combinations. For the two paellas I plan to prepare, the first will either be my Fideuà, a noodle version of paella, or this Vegetable Paella I shared recently.

The second one will be this squid ink paella. Not everyone will be a fan but I hope to convince the one or two naysayers in the group to learn to enjoy this sepia-rich dish, an ingredient that seems as divisive as anchovies. My squid-ink-averse husband became a convert with this recipe and I hope to attract more to my camp at the party. 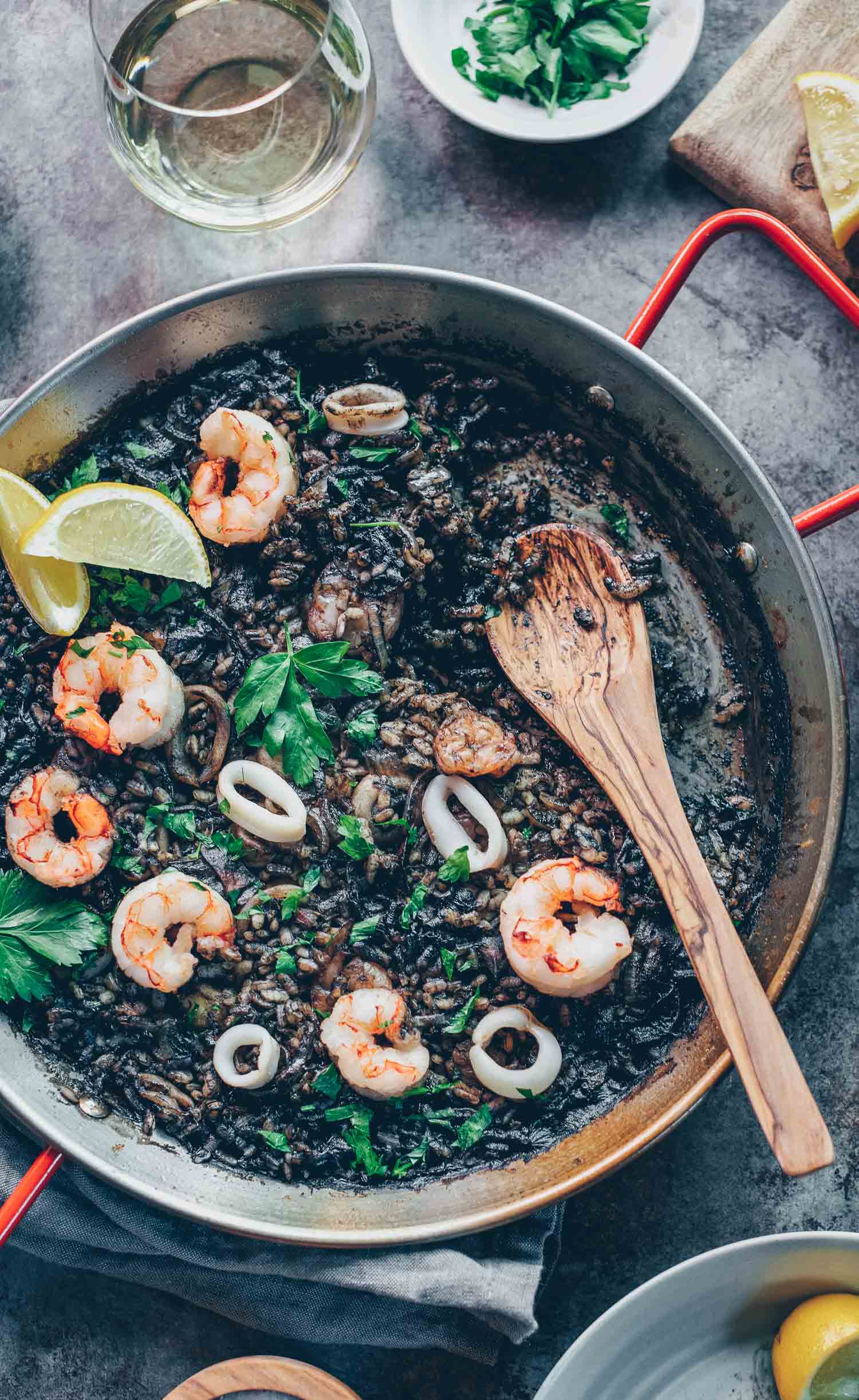 If you’re a fan and have searched recipes online you will have noticed the multiple aliases for the dish–squid ink paella, paella negra and arròs negre. The first is what much of the English-speaking world calls it, the second is what much of Spain calls it but in Valencia (Catalunya region) where this dish originated, the proper term is Arròs Negre (Valencian dialect; literal translation, black rice). In fact, Valencians would not call this paella at all even though it’s prepared in much the same way. 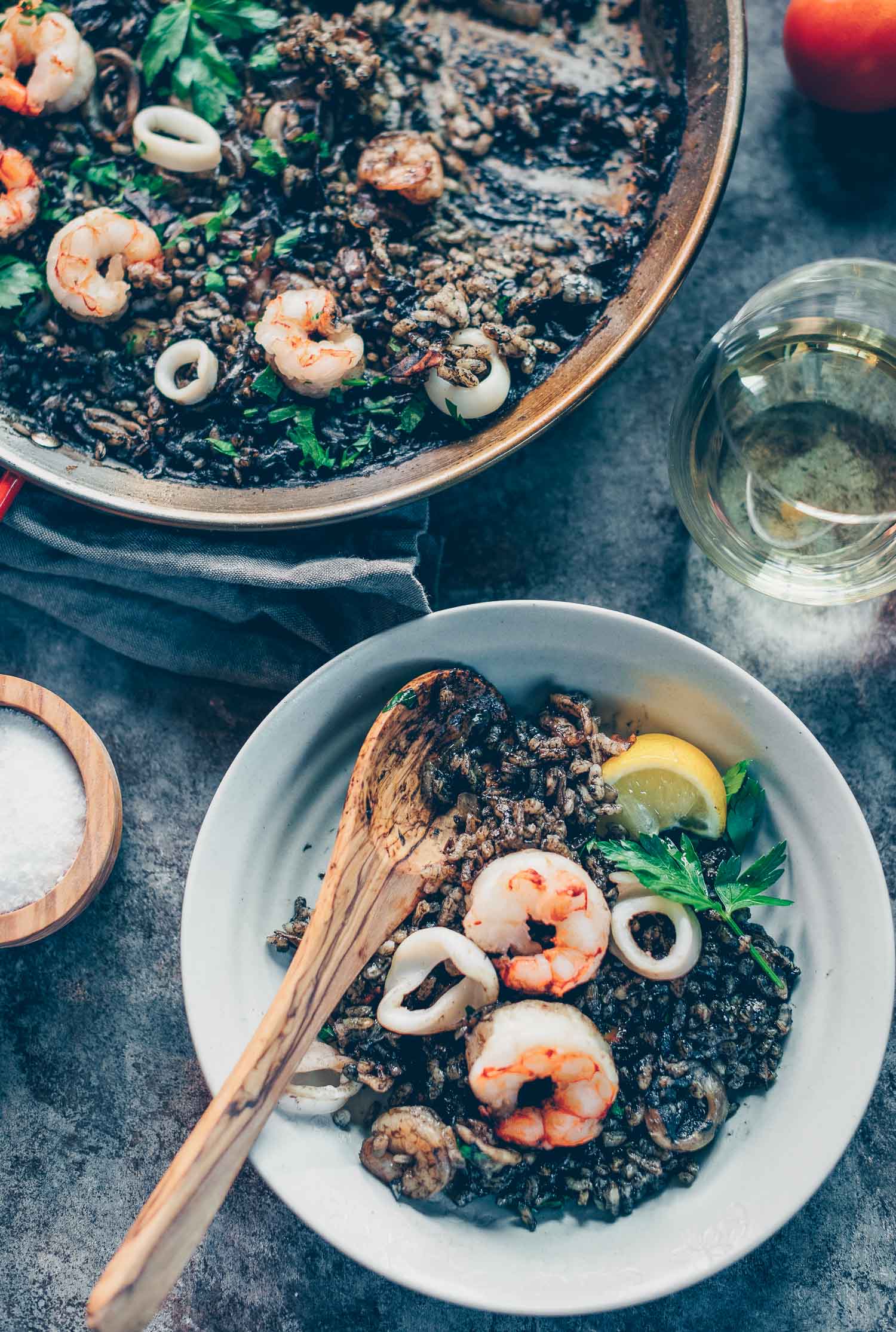 I would venture to say that only a Valencian might frown at us calling this paella (when my husband and I traveled from Barcelona to the tip of the Valencian coastline no one corrected me when I used the term paella negra). The cooking vessel, method and most ingredients are the same between paella and arròs negre, the key difference being the squid ink. Others might also point out that because of the ink, socarrat, the coveted crispy rice at the bottom of the pan in paella, is usually absent from this dish.

Like most paellas, arròs negre is prepared simply with just a handful of ingredients. It starts with a sofrito of garlic, onion and tomato, followed by the briny, umami-rich squid ink and seafood stock with shrimp and calamari as the main proteins. My version here embraces tradition for the most part but this dish can be adapted for your favorite seafood–scallops, crab, mussels, clams. 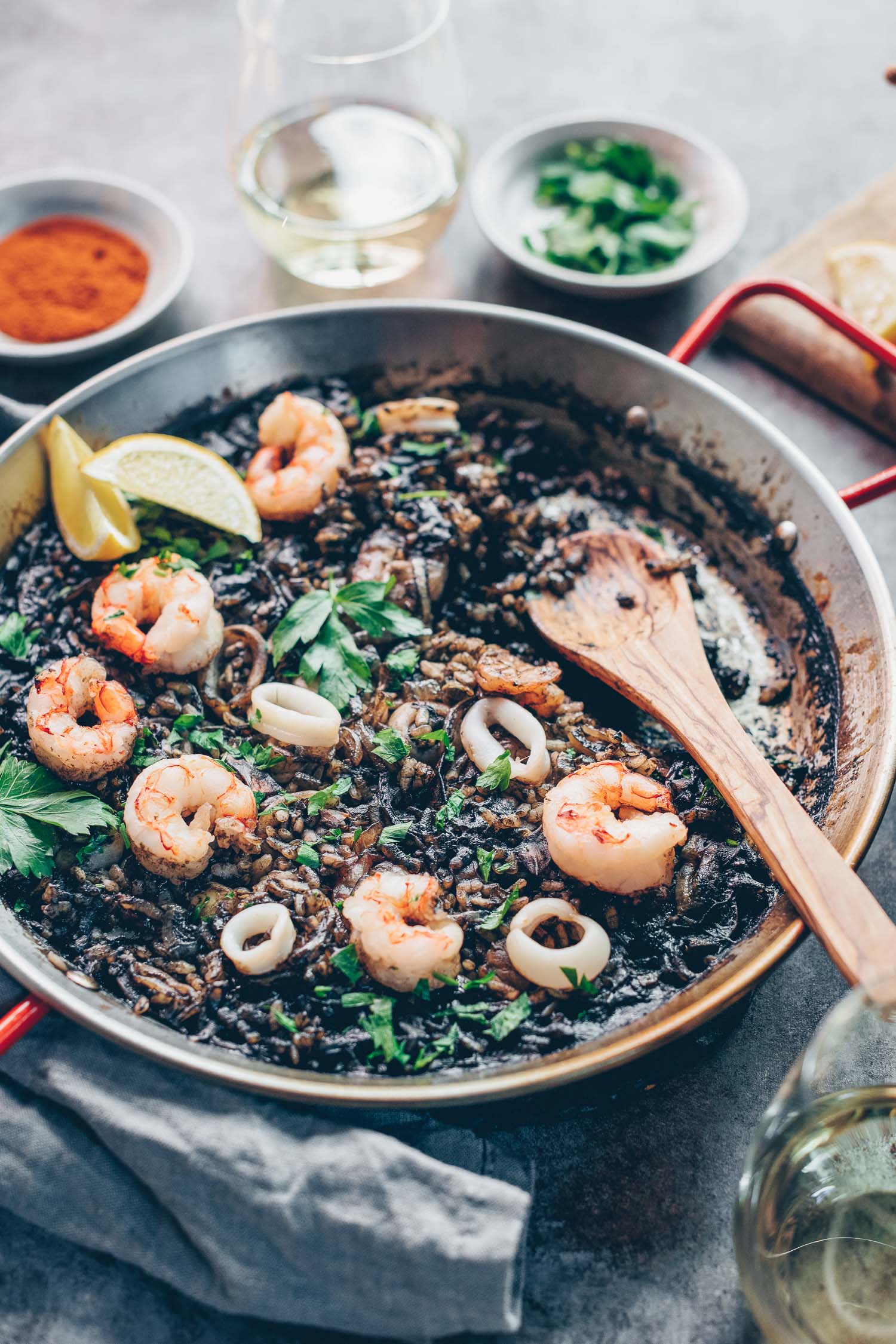 Some recipes use paprika and/or bell peppers and others omit both. Spanish smoked paprika is a key ingredient in my paellas so it’s used here, too. I had originally planned to include a red bell pepper but at the last minute I was inspired to substitute hot red pepper paste instead. The paste added a good layer of flavor and a nice little kick.

In the Alicante region a mildly spicy sauce called salmoretta is sometimes used in paellas and arròs negre. Made with olive oil, garlic, tomato, parsley and the region’s native ñora peppers, the ingredients are cooked in a pan, blended then added to the dish. Besides a little heat, salmoretta is meant to add a mild smokiness to rice dishes and I’m not sure if it is used in lieu of or in addition to smoked paprika.

During our travels it was common for us to see paella–both traditional and squid ink–served with alioli. Alioli is a garlicky olive oil mayo that serves as a dip for potatoes and certain rice dishes, arròs negre included. I love aioli for certain foods but it’s not something I would need to complete this dish. 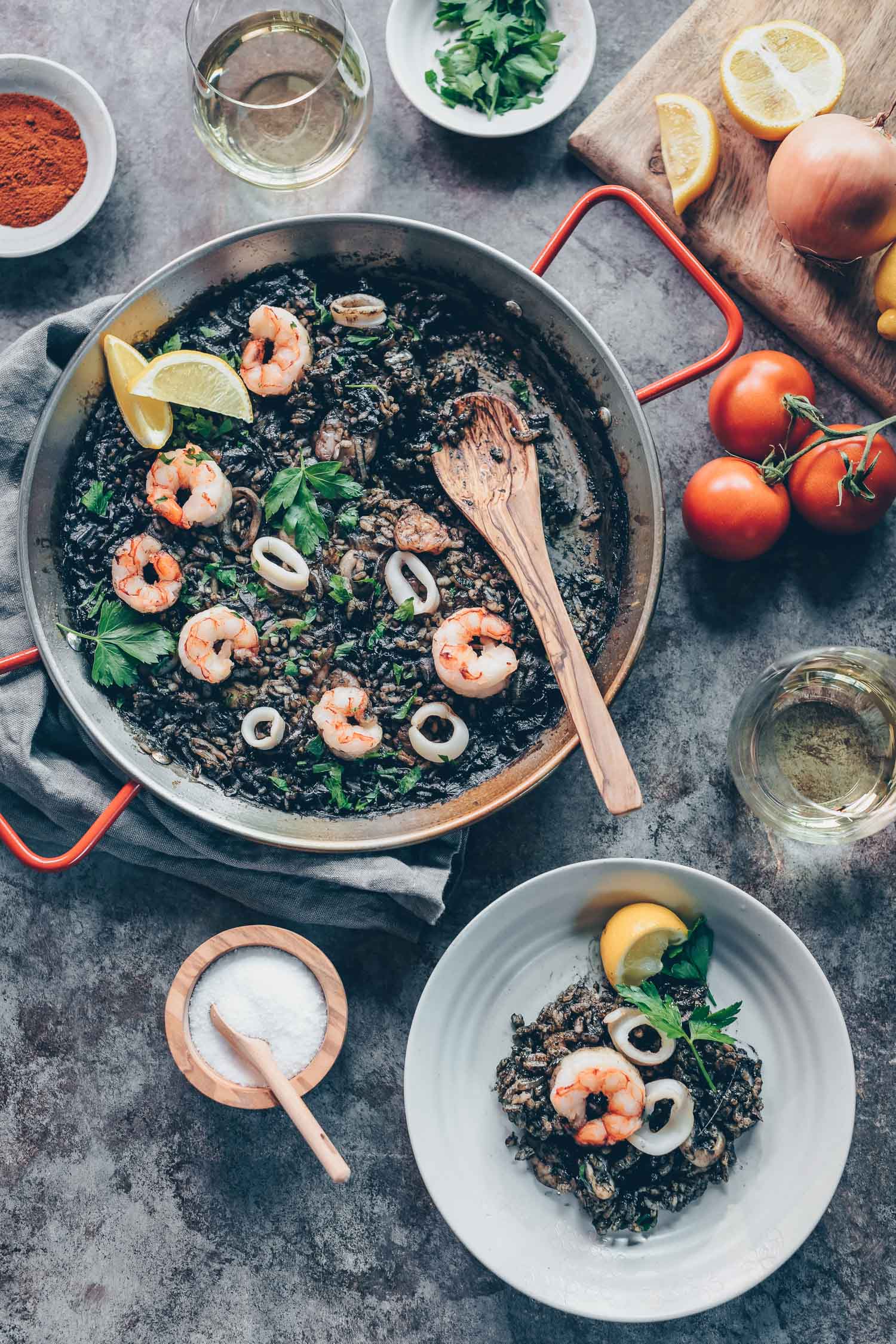 The plan is to have this paella party before Christmas and with travel plans, holiday parties and other commitments I’m hoping we can secure a date before the first half of December. Am I anxious? A little. The main course decided and the responsibility divided I’m not as nervous as I normally would be. Besides, my friends make great guests and deep down I know my stress is unfounded.

How to Eat Paella/Arròs Negre

One thing I might need to do is pick up more of these little olive wood spoons. Did you know that paella is traditionally eaten straight out of the paella pan with a wooden spoon? I’ll be just a tad short for my party of eight but with the wine flowing and laughter abounding, my wooden spoon shortage will hopefully pass unnoticed.

Where to Get Squid Ink

You can harvest the ink from a squid yourself but easiest thing to do is to buy it. They are not available locally here in the Bay Area so I order squid ink online. I have ordered both on Amazon and LaTienda.com (where I also get my paella pans).

Squid ink is sold in jars or in small packets. To give you an idea, this recipe for two used five packets (at four grams each, about 1 tablespoon). This option would make more sense if squid ink is not something you see using all the time. However,  buying in jars would be more economical and you can freeze the ink in smaller portions.

Lastly, when you shop for squid ink what you’ll most likely find is cuttlefish ink and this is perfectly okay. 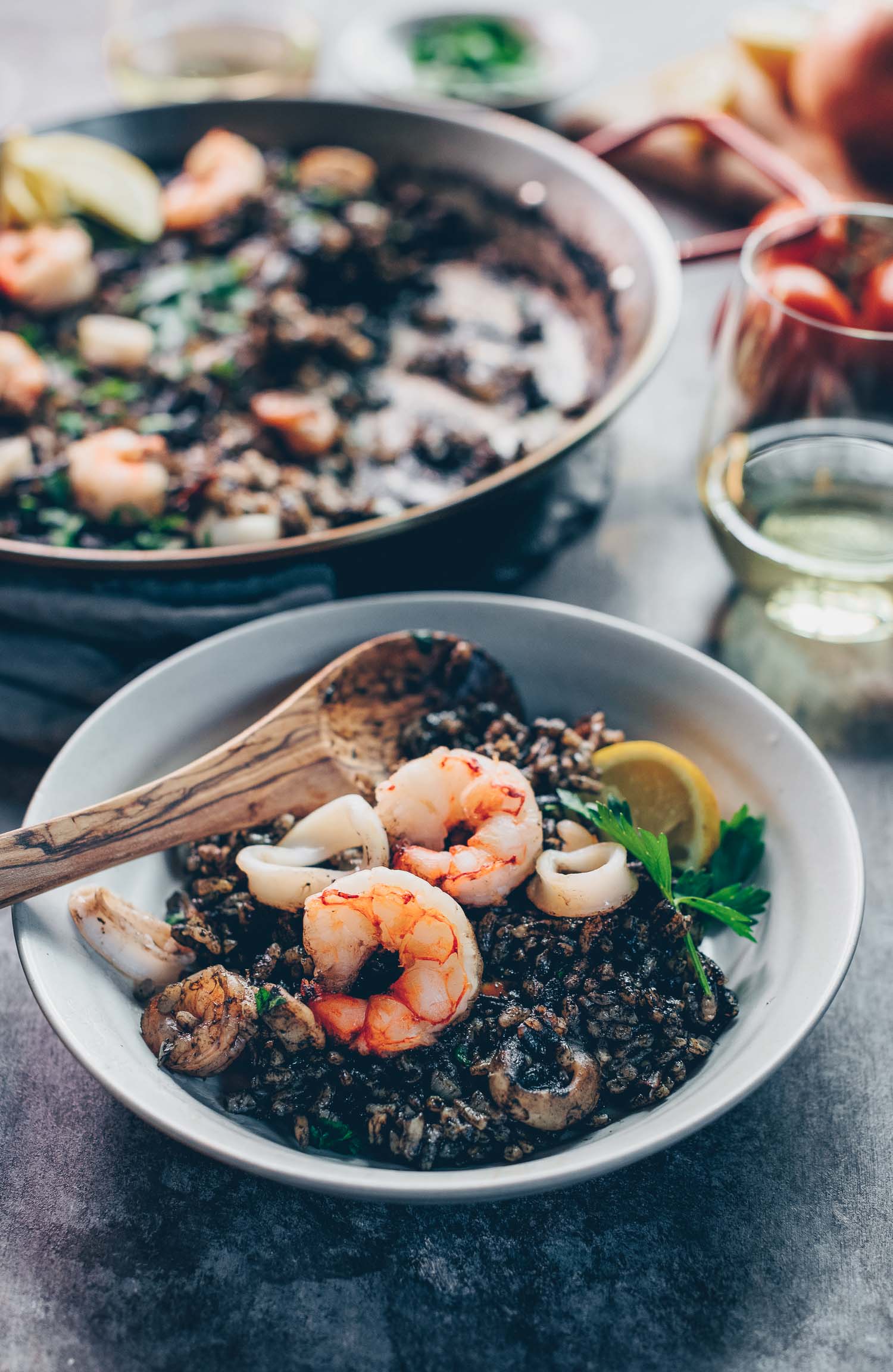 You either love squid ink or you don't. If you're in the first camp this arròs negre, loaded with shrimp and calamari, could just become your go-to recipe.

Hot Red Pepper Paste: I recommend using either the Goya brand which you can find at most Latin markets or the Sera brand Turkish hot red pepper paste that you can find in most Mediterranean markets.