A handful of ingredients is all you need to give edamame a huge umami punch. 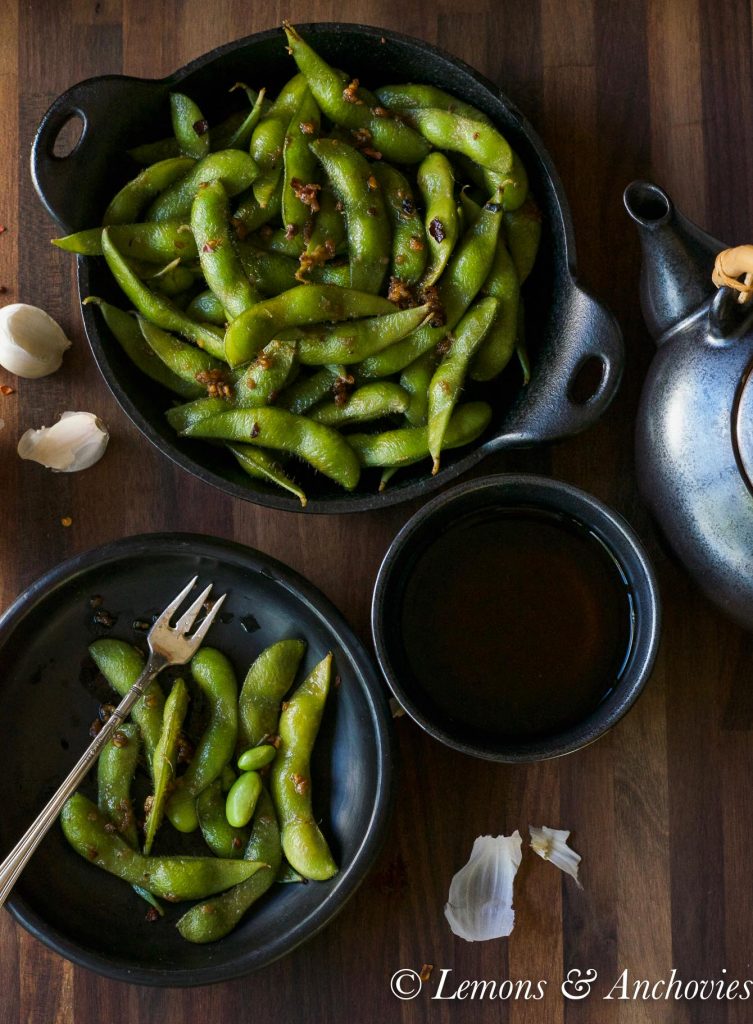 An old friend paid us a visit recently and as all conversations go around here, the subject eventually turned to food.

“You have to go to Kemuri in Redwood City,” he said. “Better yet, I’ll take you there.”

Our friend, Jack, may have added that last bit knowing our penchant for the familiar–my husband and I tend to visit the same restaurants over and over again. Other friends on the other hand, because of this blog, are quick to label me a foodie. I’m both flattered and secretly embarrassed when they do because this home cook doesn’t live up to the moniker. There’s weight and responsibility attached to the word. One of the latter, I feel, is that I should be in the know about the trendiest hotspots around me. Instead, I’m always stumped when people ask, “What’s new?” Kemuri has been around for almost three years, I live just a town over and I didn’t know it existed until our friend mentioned it.

I’m glad our friends keep up with the local restaurant scene. Because of them I’ve recently been introduced to–and have been so pleased with–two new-to-me restaurants (one Korean, one Japanese) all in the space of one week.

At Kemuri last week we dined family-style so I was able to sample several items on the decidedly fusion-heavy menu using traditional Japanese ingredients. To name a few items: the mackerel ceviche seared at the table with a torch; the carpaccio salad with smoked octopus and shiso-basil dressing and the paella topped with uni (sea urchin) and salmon roe. The menu might have sounded a bit gimmicky but the dishes worked. Not one dish lacked flavor.

But for all the edgy offerings that were brought to our table the simplest dish made the biggest impression on me. The edamame. The group having chosen the umami-flavored soy beans over the smoked variety, I expected the edamame to be tossed in a seaweed base (like furikake) but the restaurant had something else in mind.

The umami explosion didn’t come from seaweed but rather from garlic and anchovies. I was surprised because anchovies are not often used as the dominant component in a dish unless you’re talking about a traditional Caesar salad (maybe telling of the restaurants I frequent)…and even then you usually have to ask for the extra topping of anchovies. Some people are put off at the mere sight of anchovy fillets on a dining companion’s plate so I wonder if this is the reason Kemuri opted not to list anchovies when describing the edamame. A good number of their guests might reject them and miss out on a good thing.

Whatever their reason, I found myself doing the same in titling this post. In my experience most people enjoy dishes with anchovies even if they claim not to like them. They melt into the background and, though invisible, they make their presence known by adding a layer of complexity that can be a challenge to identify but is undeniably pleasing, even for the anchovy-averse. My husband loves anchovies but he found them heavy-handed at Kemuri. When I recreated the snack at home I upped the garlic flavor, toned down the anchovy just a little and added chili flakes for even more kick. He might be biased towards my cooking but I was tickled nonetheless by his declaration that my version was superior to the original.

If you like anchovies, you will love edamame prepared this way. Serve them at your next gathering and slide the plate over to your anti-anchovy friends; I bet they will love them too. Or better yet, visit Kemuri and tell them this (non)foodie sent you. 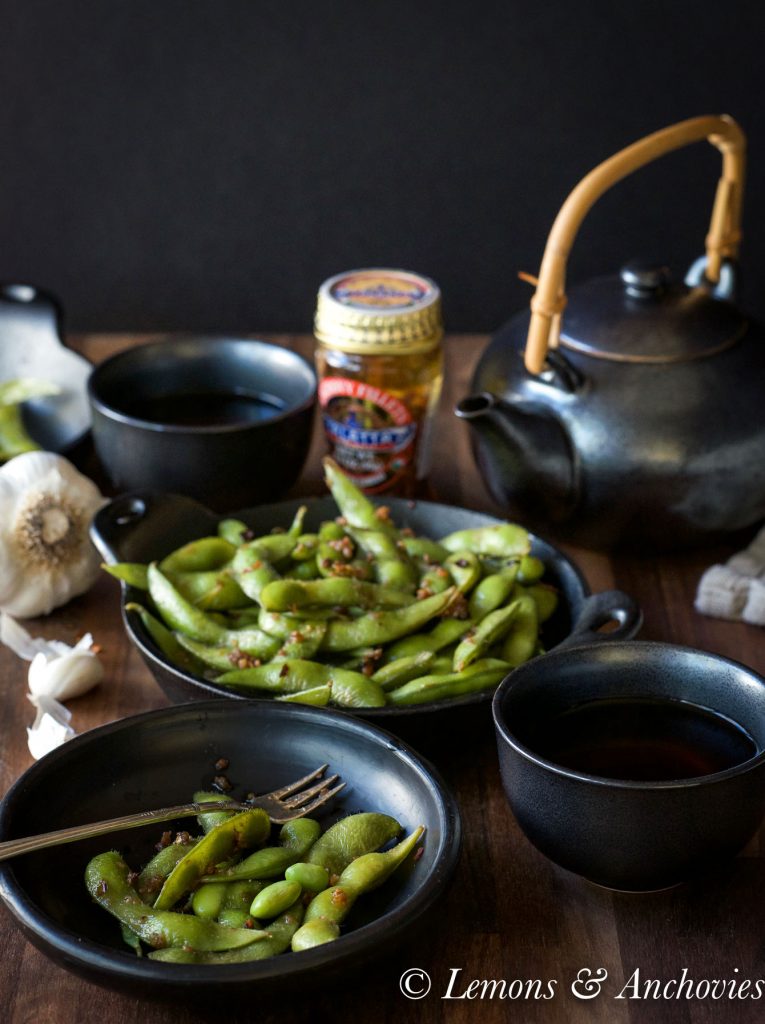 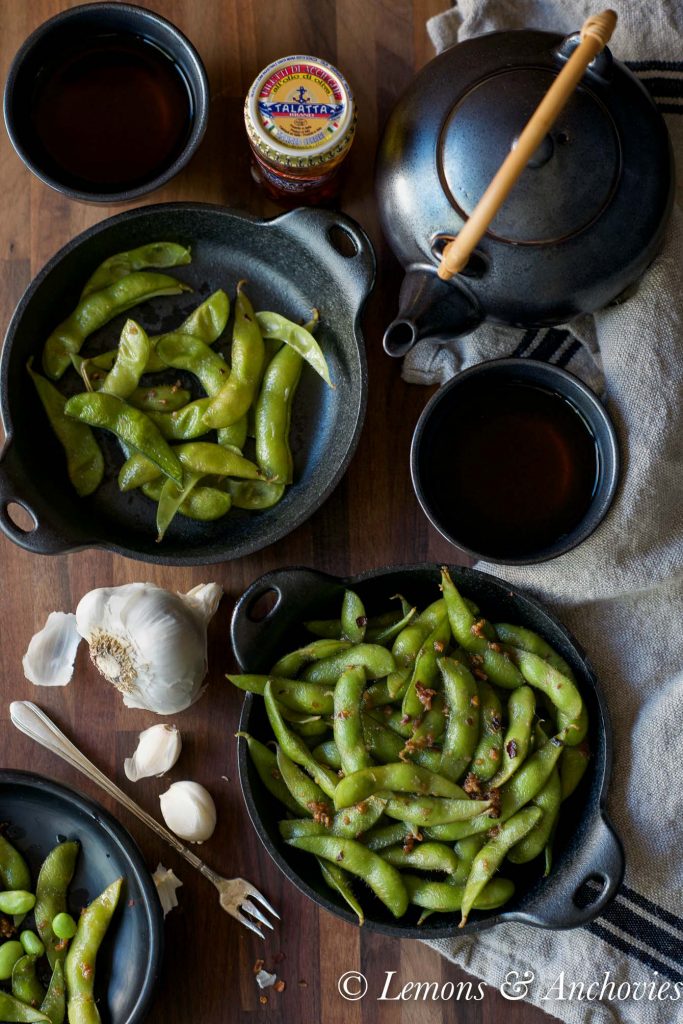 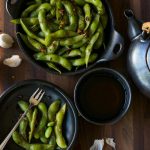 My anchovy fillets are small so I recommend starting with four pieces. You don't want the final product to be too salty. After you've tossed the edamame in the pan, taste and add the additional fillets if you feel the dish needs it.