After five days of being home jet lag’s grip is finally weakening.  I consider it a success to have resisted going to bed at 6 pm but rather, making it until 8 pm and not getting up until 6:30 this morning.  As much as I missed cooking it took the better part of the week  before I finally the turned the oven on again after nearly a month.  From here on, however, I will be making up for the lost time.  I’ve got a few things in mind to bake but namely, a birthday cake for someone special.  I just have to decide on the kind of cake to make.

For my reunion with my oven, I decided on a batch of apricot bars.  I have not been able to get my friend, Laura’s Brandied Apricot Bars out of my mind since she first shared her recipe in May, at the beginning of apricot season.  I turned out a couple of recipes highlighting the sunny sweetness of the stone fruit–this Arugula Salad with Apricot-Mint Vinaigrette and this Apricot Frozen Yogurt–but I never got around to making Laura’s bars.  Four months later her recipe is still on my mind but fresh apricots are long gone.  This is what I ended up with using dried apricots instead.

I soaked the dried apricots in pear liqueur mainly because I had a big bottle of it and also because I was curious if it would impart a lot of flavor while it softened the dried fruit.  As an afterthought I tossed in a container of raspberries to infuse the final product with some freshness that I wouldn’t get with the apricots but I wondered if using the liqueur would be a good idea at all.  The lesson from this experiment is not to soak the apricots in the liqueur for too long.  I soaked mine for an hour, just long enough for the dried fruit to be slightly rehydrated and for some of the sweetness of the liqueur to seep in.  A little longer and I do believe that the liqueur would have imparted a medicine-y taste.  Cointreau, brandy or rum are worthwhile substitutes that might eliminate this possible negative effect.  Or if you want to leave out the alcohol altogether, you might consider soaking the fruit in orange juice.  Just a thought.  I took another precaution against this by soaking the whole dried fruit and waiting to chop them until later to minimize the liqueur infusion.

All in all, the bars turned out wonderfully.  The crust was crisp and sturdy enough to support the chunky fruit filling but crumbled nicely when biting into it.  The apricots were sweet while the raspberries lent a slightly tart finish.  Nicely balanced.  Be warned that the filling is sticky and the crust was still soft after cooling on a wire rack.  I removed the uncut bar out of the baking pan, transferred it to a cutting board and refrigerated it overnight.  The bar that I was hoping to end up with when I put this in the oven yesterday was waiting for me in the refrigerator this morning.  It went perfectly with my cup of tea.  No need to wait until the next apricot season to enjoy a good apricot bar (but be sure to try Laura’s when it does roll around again, I will) but I wonder how this version using dried apricots would turn out if I puréed the apricots first next time?  Just considering the possibilities… 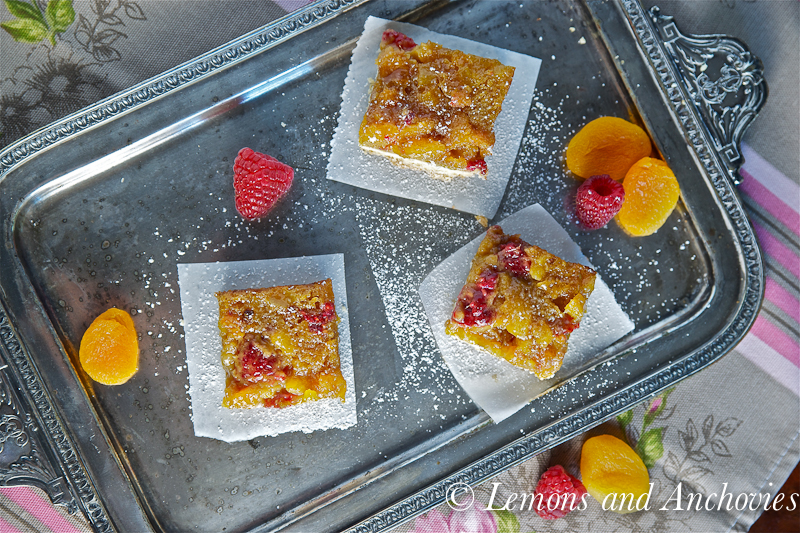 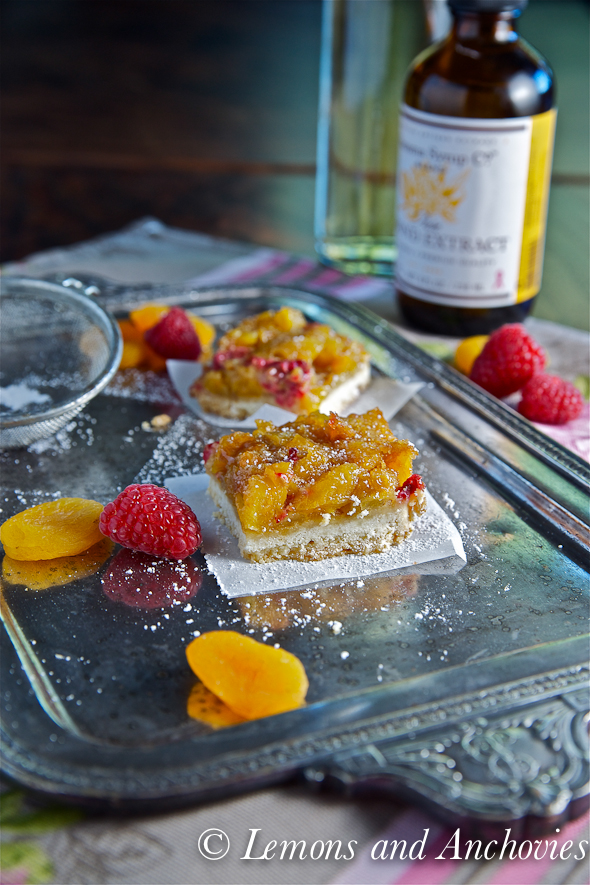