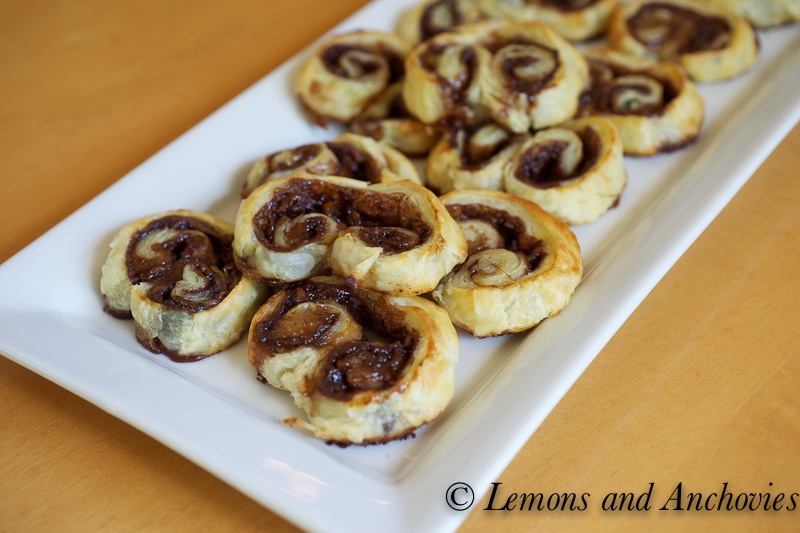 Some of my fellow food bloggers and I got together this weekend for Sunday brunch in my home.  To say the event was a food fest is an understatement.  Creativity was the unspoken theme as my friends each presented classic buffet dishes with a tasty twist.  There were too many to name but whether you favor sweet or savory fare, there was no shortage of either.

I managed to take only these few, less-than-presentable pictures but surprisingly, I’m not disappointed.  For once, I was much too busy stuffing myself and enjoying everyone’s company to pay much attention to my camera.  Besides, some of my favorite bloggers were in my home–what a privilege to have been able to taste their creations rather than just read about them.  I served some appetizers, including my homemade hummus, one of my favorite spring salads and these palmiers.

The palmiers were a product of a last-minute change of plans for dessert. I had planned to make Portuguese Egg Tarts but discarded the idea at the 11th hour in lieu of something easier.  I rummaged through my cupboards and saw a jar of Nutella and orange marmalade.  Immediately, the pair reminded me of the Godiva truffles infused with Grand Marnier liqueur that I used to enjoy so much–chocolate with a hint of citrus.  Would they work together sandwiched in puff pastry, I wondered.  Dipping a spoon in the jars to sample the two together hinted at the possibility of success so I decided to go for it.

Palmiers are rolled pieces of puff pastry, and while typically flavored simply with sugar (and sometimes cinnamon), they are friendly to many other flavor combinations, savory and sweet.  The Nutella and orange marmalade together worked nicely; I quite enjoyed it actually.  The sweet and fruity pairing was mildly reminiscent of the Godiva truffles even though my creation missed the mark in the elegance category.  Imagine these decidedly casual guys being served alongside some perfect macarons and a cherry tart with chocolate ganache and you’ll understand what I mean.  Fortunately, they were served to the most gracious of food bloggers and they didn’t take away any points for my not-so-pretty puff pastry experiment.

I’m already looking forward to the next blogger get-together!

Here are my notes to make the palmiers look better next time: