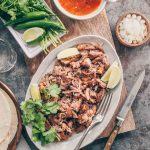 Stock/Liquid and Meat Amount: For 3 1/2 – 4 pounds of pork you can use the same amount of liquid. You get about four cups of pork stock from this recipe and it can be frozen for other uses. Edit 6.29.22 I cook up to 5 1/2 pounds of pork without adjusting the liquid amount and it fits comfortably in my six quart pressure cooker.

Seasonings: Feel free to use your own combination of seasonings and spices for this recipe–I used what I have in the pantry but the allspice is the key here. It adds a subtle, pleasant hint of spice that I really like and the ancho Chile powder a touch of smokiness. My seasoning mix makes about two to three tablespoons. Edit 6.29.22 Using a little extra paprika and ancho Chile powder work well too.

Allspice 6.29.22: I prefer now to use one tablespoon for this recipe because it lends the best flavor.