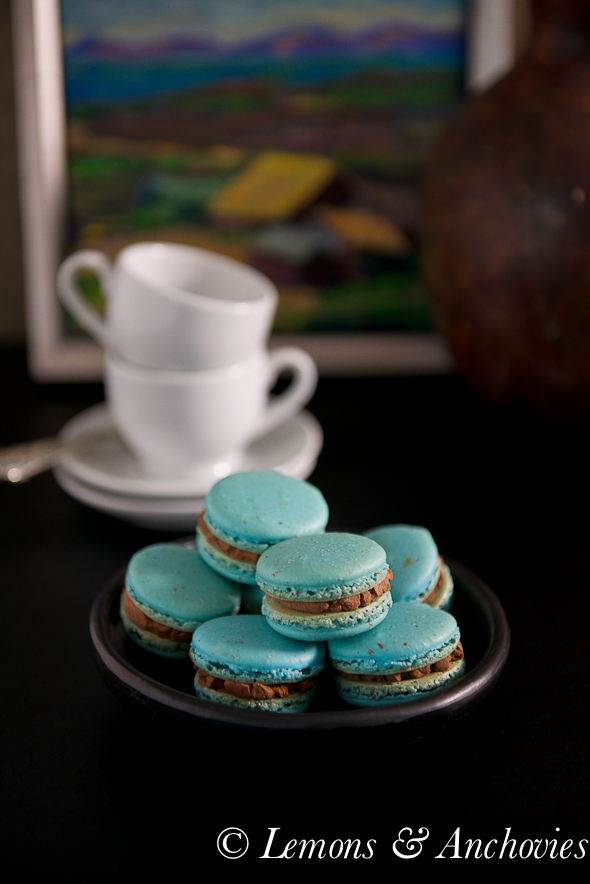 Earlier this year I attended a macaron class at Sur La Table.  Next only to tackling homemade fresh pasta and yeast bread, the French sandwich cookies rounded out the “big three” of my to-conquer list in the kitchen.  The more I read about them–how challenging they can be and how many variables could affect the finished product–the more intimidated I became about attempting French macarons at home.  Naively, I was most concerned about getting the piping technique right but I walked out of that class with new concerns:  properly beating the egg whites and successful macaronnage (properly folding the meringue with the dry ingredients).  Even so, the class was a huge leap forward, making me feel like the challenge would not be impossible to accomplish.  Several months and three attempts later, I finally had a batch that was worthy of sharing. 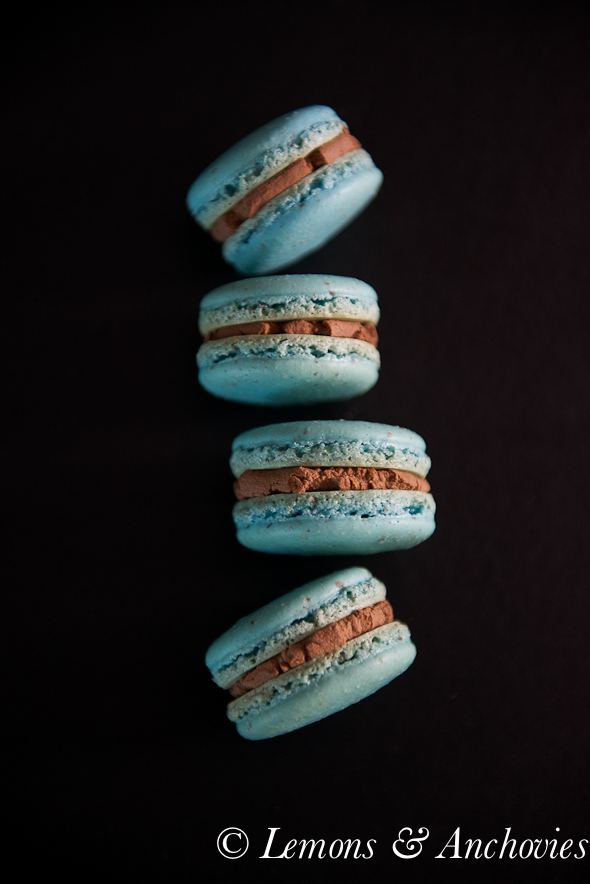 The main challenge for me?  Hollow shells.  After reading countless online resources I learned that this was a common problem for new macaron bakers and that I was probably under-baking my macaron shells.  So I increased the baking time and, suspecting I was also using too low a temperature, I raised the latter by 25 degrees (Fahrenheit).  The third time was a charm, it seemed.  Even though I’ve been pleased to see the much sought after “feet” (pied) on my shells they’ve been hollow until this third attempt.  This time the shells were crisp on the outside and had a nice chewy center.

One other thing I wanted to improve from my first two batches was the sweetness of the shells.  The Sur La Table recipe I had been using was a tad sweet for my taste but I didn’t know how to adjust the ingredient proportions without harming the balance of the final product.  Then I found this post and this problem was quickly eliminated.  The following formula highlights the almond flavor of the macarons with just the right amount of sweetness: 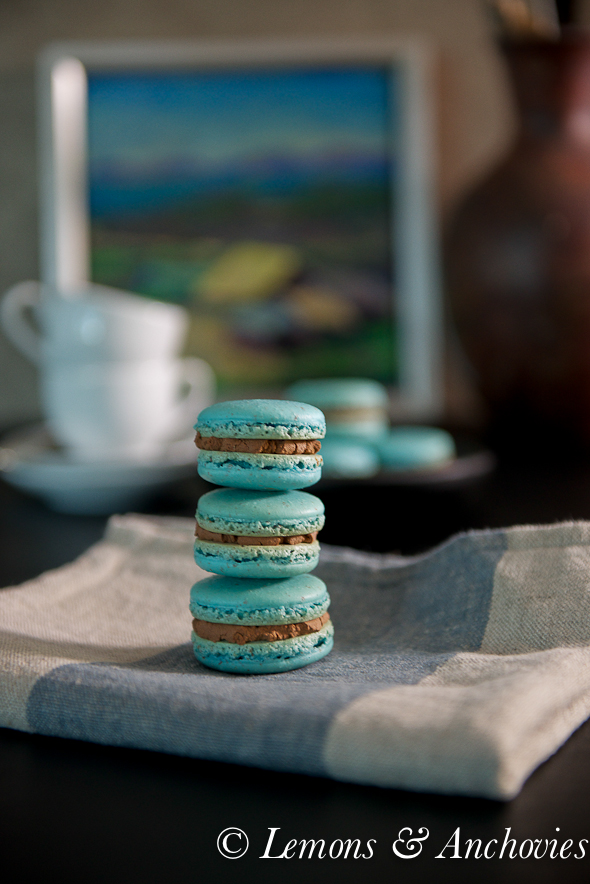 I will be the first to admit that these macarons are not perfect…yet.  Being so excited about conquering the hollow shell issue for now (I’ve read other bloggers who thought they had permanently solved this problem only to see it again in subsequent batches) it wasn’t until after I had finished photographing them that I discovered that my shells had picked up a little color in the oven.  They weren’t hard and didn’t taste over-baked at all but I might try using a silicone baking mat instead of parchment paper next time just to see if that will make a difference.

You might have also noticed that the ganache isn’t perfectly smooth and silky.  Not really intending to share this recipe on the blog yet, the filling was just an afterthought.  I put together a simple ganache out of dark chocolate, half and half, butter and Chambord.  Since half and half has a lower fat content than heavy cream my ganache was still a little too loose to use as a filling after it had cooled.  I whipped it to thicken it a little but I got carried away and the ganache turned into mousse.  Still not ready to give up I microwaved the mixture for a few seconds to liquify it a bit then whisked it by hand until it was firm again.  It worked.

The finished macarons may not be sweet shop worthy in terms of looks but I was very happy with their taste and texture.  Using the French meringue method of making macarons, the shells tend to be a bit more crisp right after they are baked.  Filling them and storing the sandwich cookies at least overnight to “mature”  gives the shells a chance to absorb some moisture from the filling, lending that chewier texture.  In fact, the famous Pierre Hermé  (though he uses the Italian meringue method of baking macarons) recommends aging the assembled sandwich cookies for at least 24 hours before serving them.  I stored my assembled macarons in the refrigerator overnight and brought them to room temperature the next day to wonderful results.  They really were better on the second and third day.

Don’t be surprised if you see more macaron posts over the next few months.  I’m determined to master the French meringue technique and maybe after that I’ll give the Italian meringue method a try.  For now I’ll savor this one successful batch.

Notes (I’m no expert yet but these are the observations I’ve made and tips I’ve picked up so far): 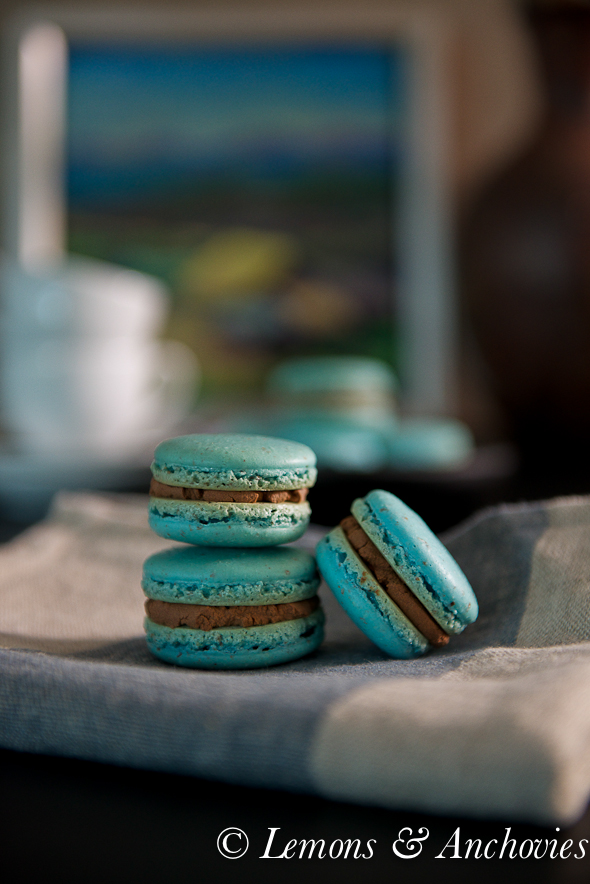 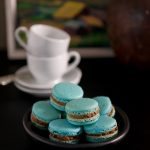 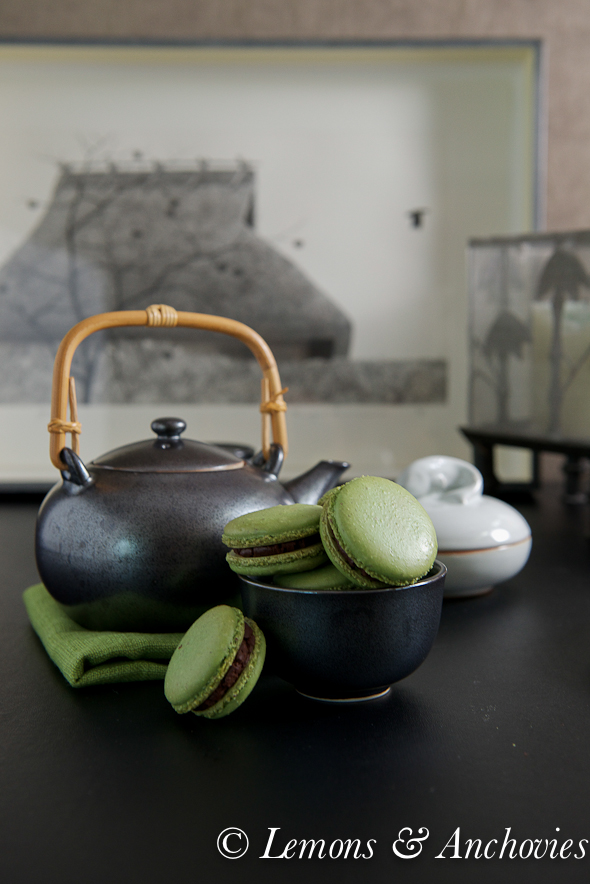