When work makes no demands on my time, Thursdays end up being my free days.  Not free in the sense that I have no responsibilities.  Rather, they are spent on chores that have accumulated during the week, exercise that has been neglected and of course, cooking.  But my time is my own and I am free to prioritize in the way that I wish.

I find that on most of these Thursday mornings I linger just a bit longer over my cup of tea.  I draft my grocery list around a more elaborate meal to make up for the much simpler Monday – Wednesday fare.  Overall, Thursdays are good days.

The last couple, however, have been more frenetic than relaxing.  Work has been a bit busier, I am spending my free time studying for a couple of things and we are preparing for another trip.  The destination is new to me; I am very excited to visit a new place and also to experience it with my husband and good friends.  I hope to be able to share a bit of it here as the trip happens but I won’t put that extra pressure on myself.  I will just make sure to take lots of pictures to post when I return. 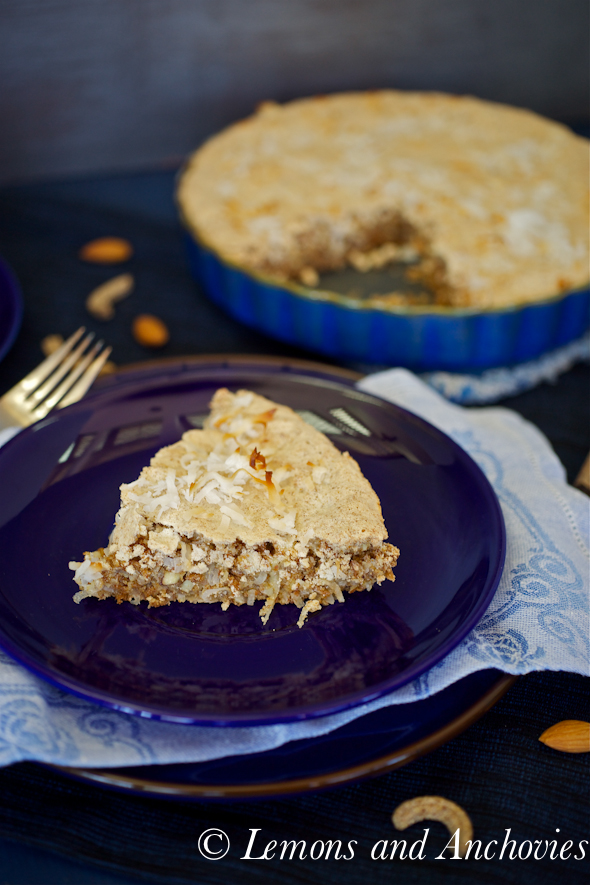 Shoving aside the errands, chores and studying for just a little while last Thursday, I made this simple torte to satisfy an overwhelming craving for, of all things, coconut.  I had purchased a bag of sweetened shredded coconut earlier that week with no ideas for an end product.  I let the bag sit on the counter for a few days hoping to be inspired.  With the help of this recipe, I ended up with this coconut-almond torte.  I made substantial changes to the ingredient list to accommodate what was available in my pantry and had to question myself several times if my substitutions would work at all.

The recipe called for graham cracker crumbs but I had none.  Instead, I used almond meal and ground up multi-grain cereal to replicate the graham cracker texture.  I had no pecans so I used almonds.  Instead of vanilla and rum extracts, I used lemon and almond.  Instead of a pie pan I used my quiche pan (just because) and I topped my torte with extra coconut.

While this torte baked I wondered if it would end up a casualty of my experiments.  While I am more adventurous with savory recipes, I am never confident about making changes to sweet ones.  As I pulled this out of the oven, there were no strong indications of failure but there was no big pull towards success either.  The surface was a firm shell from the egg whites–to be expected–but it wasn’t until after it had cooled and I sliced into it that I finally smiled.  The torte was just right inside–chewy in texture with added crunch from the chopped almonds.  The almond meal and cereal lent a slight graininess that I liked but this torte was far from dry. The coconut and almond flavors are the most prominent but the lemon essence is unmistakable.  This cake was even better on the second and third day.

That Thursday was a good Thursday. 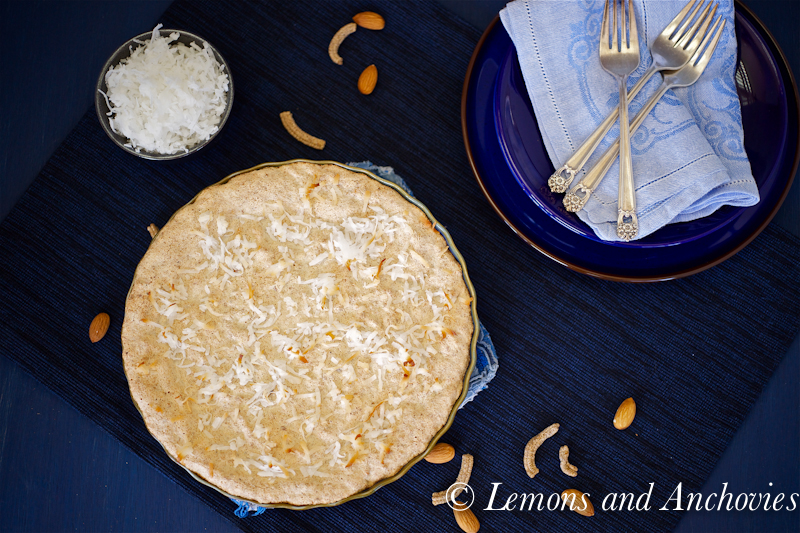 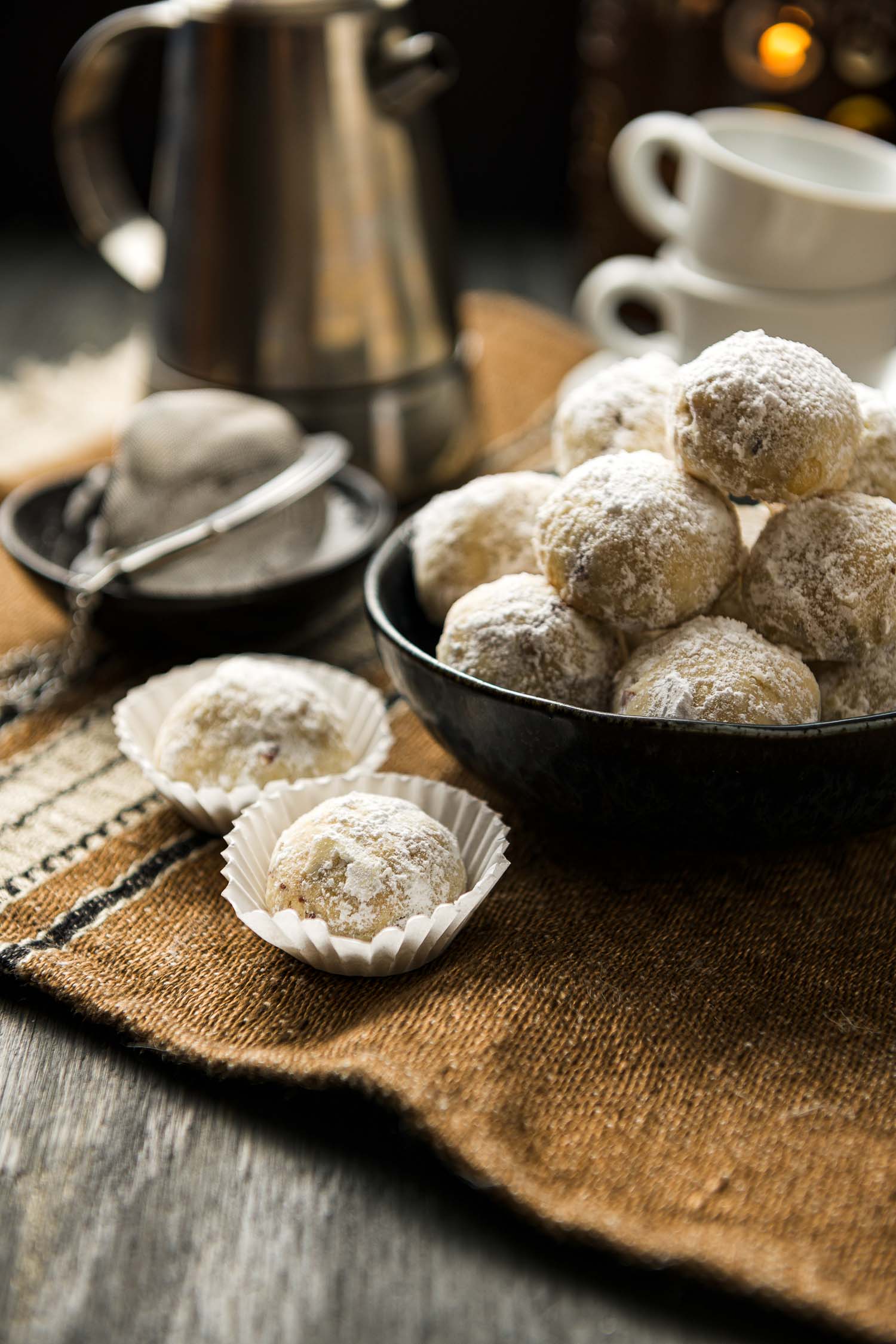 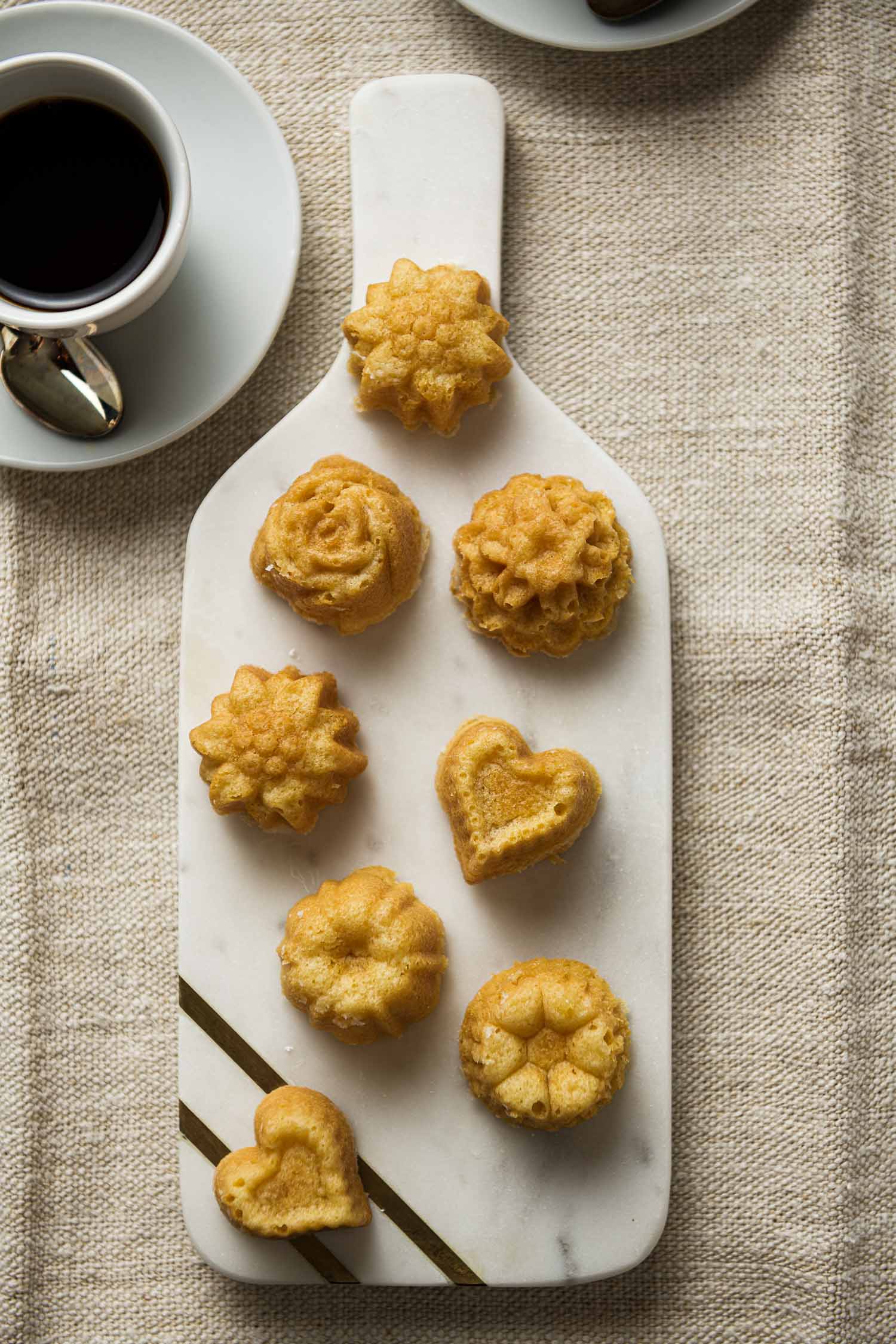