Welcoming the Ski Season with a Vegetable Soup Trio 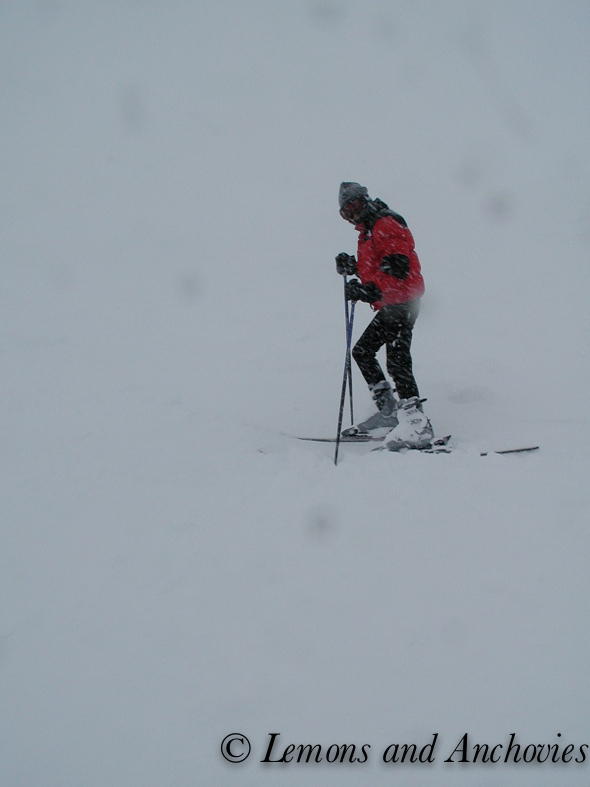 If you live on the Eastern Seaboard I’m guessing your cold, blustery holiday looked (and felt) something like the white out conditions I had to endure during a certain ski trip years ago.  I hope you managed to stay safe with family and friends and warm with a bit of egg nog, hot cocoa or perhaps something with even a bit more kick.

Being a resident of northern California, I’m a few hours drive away for any snowstorm to be a concern so this time of year brings excitement for me as it means ski season is upon us. I skied only a few times growing up so the real learning didn’t come until my late twenties when I met my future husband (“D”), a certified ski bum par excellence.  Would you like to hear about our first skiing experience together?

The time was ten years ago; D and I had been dating just under a year.  Let me preface by saying that it’s never a good idea to be taught to ski by your partner which, of course, was just what he had in mind.  You’ve got natural ability, he said.  This will be easy for you.  With our friends in tow, he took me near the top of Ajax Mountain (Colorado), helped me click into my skis  and said, “Let’s go!”

You can guess that all I had to do was look down that steep run and this coward’s legs began to feel like noodles.  I must have fallen every few feet–D was frustrated and outwardly tried to be encouraging though inside he must have cursed himself for getting into this situation.  In between runs our friends would stop alongside us to offer their own words of encouragement but it all fell on deaf ears.  All I could think about was the next fall and that was that.  Eventually, three people trying to “help” me was too much to take.  I had D send our friends away so the tears could fall freely.  I was angry, D was angry–both with ourselves and each other and in typical stubborn fashion, I got out of my skis, walked down to the nearest lift, and signed up for classes as soon as I reached the base of the mountain. 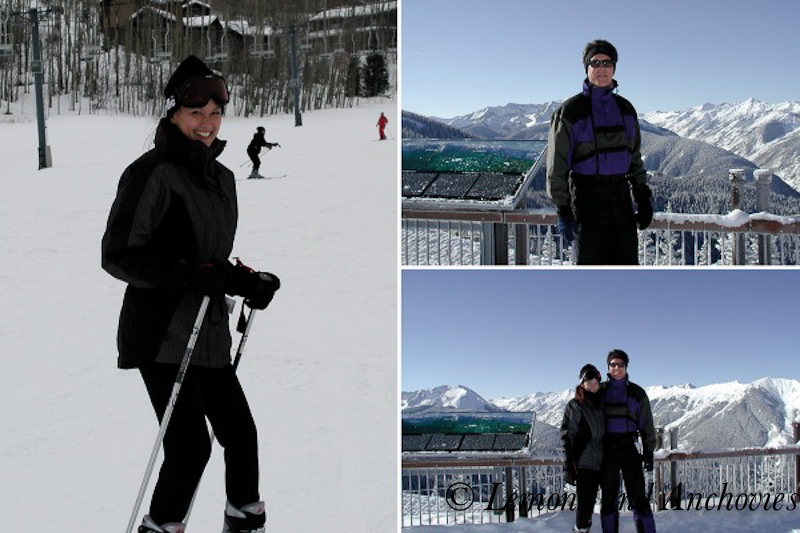 After three days of lessons and being able to ski down the blue runs (albeit tentatively) this girl found her smile again.  Since that time my skiing has much improved thanks to my husband’s determination to keep me progressing.  Knowing each other better has also helped us to assume the roles of student and teacher without screaming divorce later.  I will never be as graceful as he is is and I will never ski off piste like he does  but we’ve enjoyed some wonderful skiing adventures over the years. 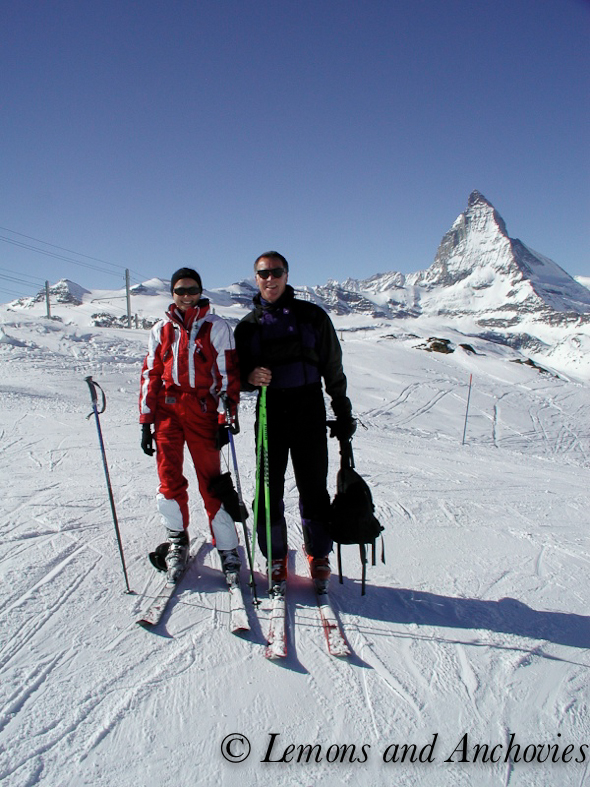 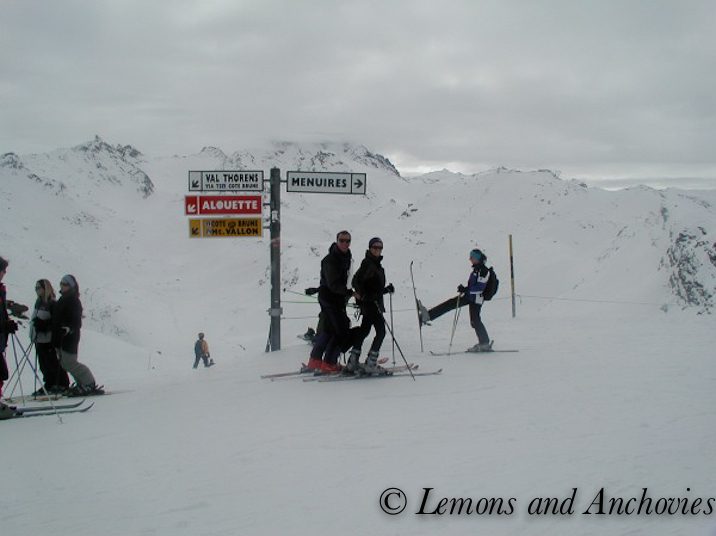 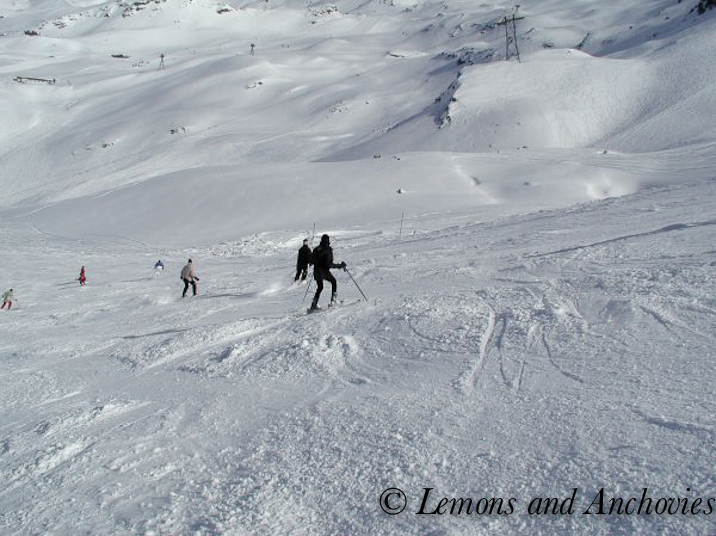 With our friends and always last down the hill..Kitzbühel, Austria 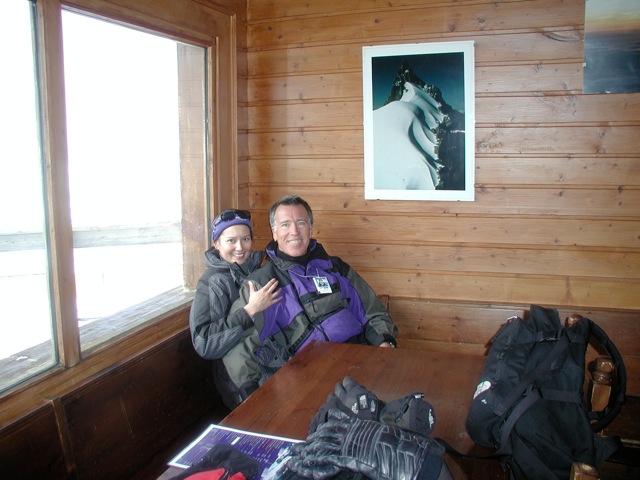 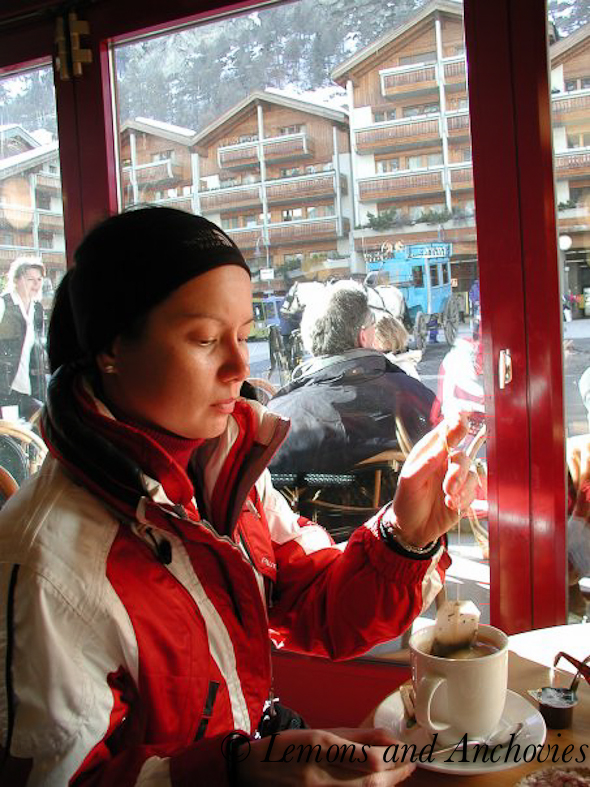 Sadly, due to a silly little fall a few years ago, fear has returned with a vengeance and I admit that I’ve regressed (quite) a bit.  After years of unquestioningly following my husband down some steep terrain, the fear is back. While I still enjoy skiing, I’m now more appreciative of quiet moments like this.

But instead of a cup of tea, I had a hankering for simple soup.  What could be better on a cold day?  I had some leftover cooked brussels sprouts, a couple of yams and a box of frozen squash purée.  I had never purchased the latter before but I wanted to experiment with it.

The other, bigger inspiration came from Lisa at Authentic Suburban Gourmet.  At a dinner party she threw recently, she served a delicious zucchini bisque that got its flavor boost from a bit of curry powder.  When Liren of Kitchen Confidante mentioned using a similar recipe, I knew I had to try it.  Two great cooks is enough of an endorsement for me!

The curry powder isn’t overpowering.  Rather it adds depth of flavor and brings out the freshness of the vegetables.  I cooked some broth in a pot but having never made soup out of brussels sprouts, I decided to cook three different soups out of the same base. Besides, I had a vague notion to showcase the vibrant colors of the vegetables and I feared that combining the three right away might result in an unappealing brownish glop.

The results were mixed.  I omitted the cream to please my husband but the brussels sprout soup was a tad too bold and would have benefited from the mellowing effect of the former.  A bit of creme fraiche and a sprinkling of grated Parmigiano Reggiano helped considerably.  The verdict?  I wouldn’t recommend this soup alone without the enhancements I mentioned.

The other two soups were wonderful on their own.  The yam soup, my favorite, was thick and sweet, perfect by itself.  The squash soup was also pleasant. Both benefited from the brightening effect of hot curry powder and serrano chili in the broth.  As an added bonus, combining the three softened the “green” flavor of the brussels sprouts which contrasted nicely with its sweet, orange partners.  Next time I might just use broccoli but the yams and squash will remain.

To prepare the broth:  In a large soup pot, sauté the chopped onions in a little olive oil.  Season with no-salt seasoning and 1 teaspoon curry powder.  Start with just one teaspoon of the latter.  You can always add more later.  When the onions are translucent and the curry powder fragrant, add 5 cups of stock and simmer for a few minutes.  Add the chopped serrano and lemon juice if desired.

To prepare the squash soup:  In a smaller pot, add a ladle or two of broth and add the frozen squash purée.  Simmer until the squash has defrosted and purée with an immersion blender.  Salt if needed and add more broth if the soup is too thick for for you .  I stirred in the remaining curry powder to the pot since I tend to find squash soups a bit bland.

To prepare the yam soup:  In another smaller pot, add two ladles of broth along with the cooked yams.  Simmer until the yams are very soft and again, purée with an immersion blender.  This will yield a very thick soup so feel free to add more broth if serving alone.  If serving with the other soups, I would recommend keeping at this consistency.

To serve, begin with the yams (thickest).  I spooned some using a cookie ring as a guide. Follow with either of the other two soups.  Top with creme fraiche, cheese, and/or chopped fresh parsley. 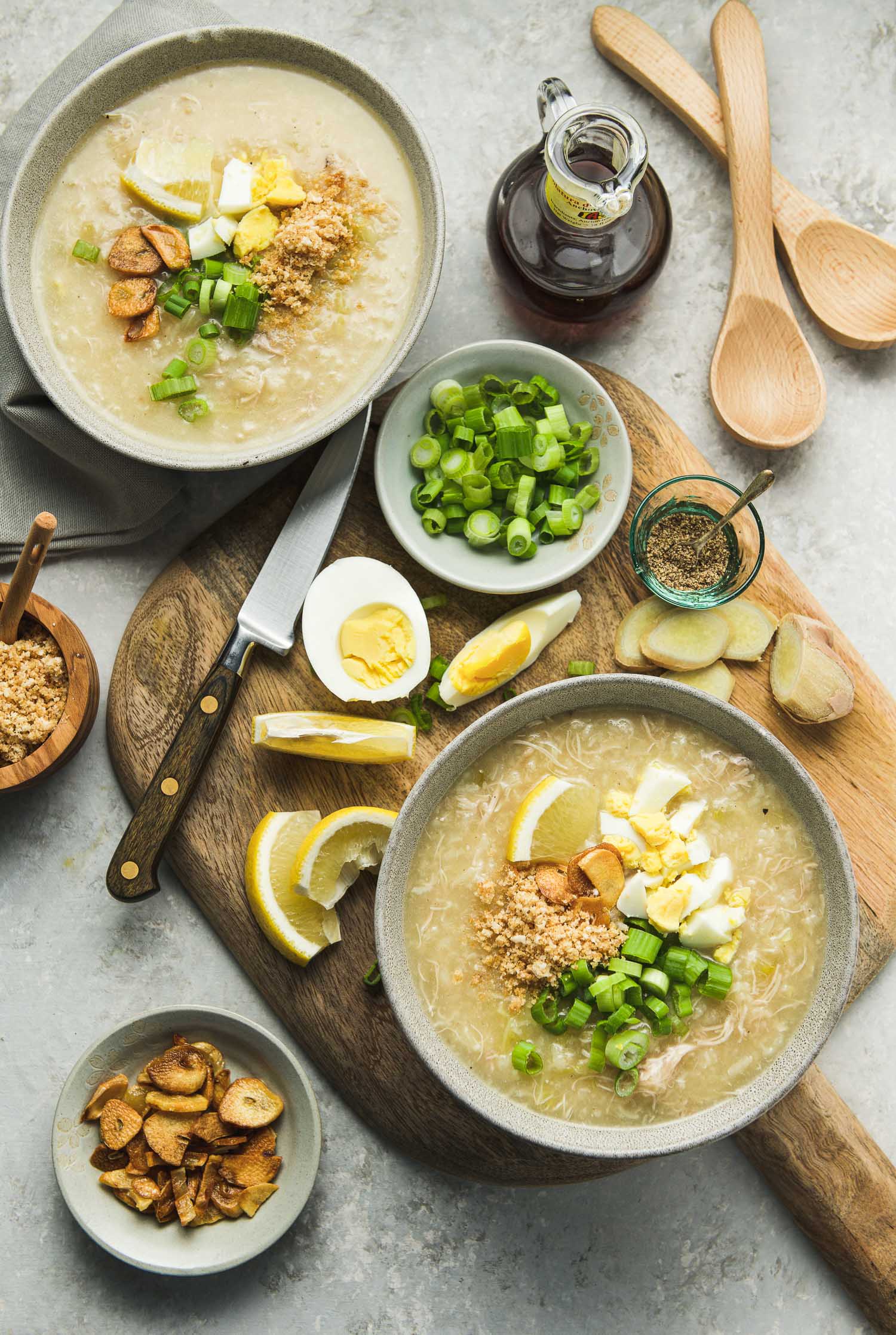 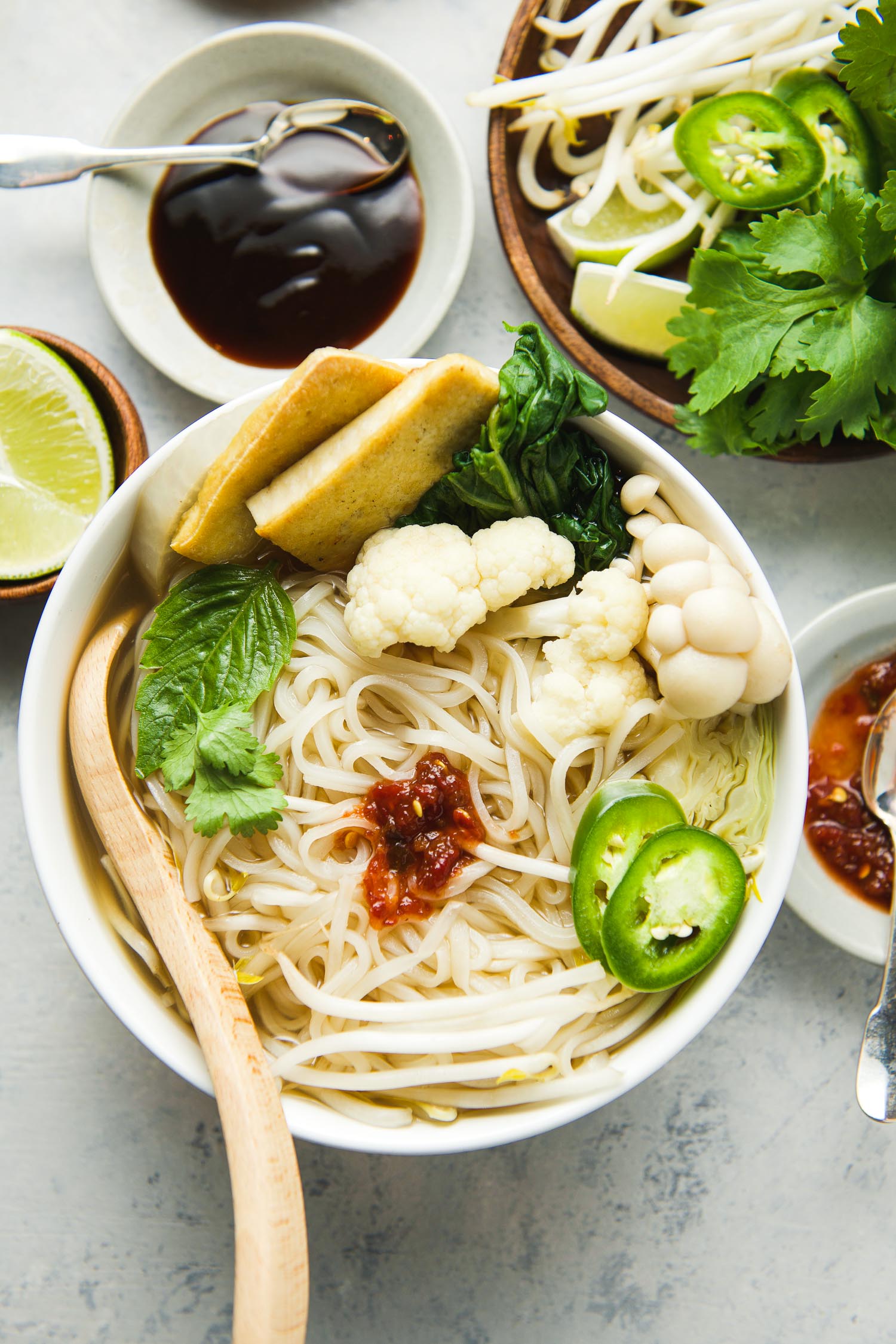