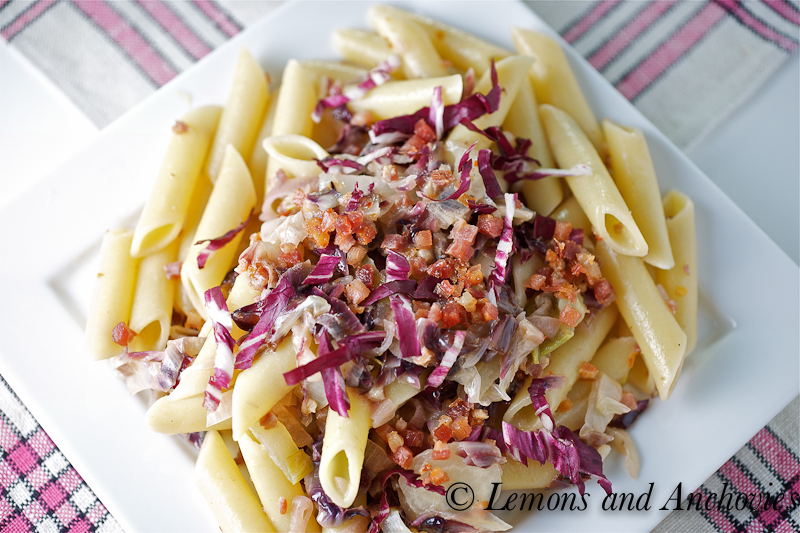 While in Rome last September, the same restaurant that served one of the best Linguine con Vongole dishes I’ve ever tasted also served quite a memorable vegetarian pasta dish.  My husband actually ordered it, but of course, I had to have a taste.  The menu simply said “Penne al Radicchio” and it turned out to be a humble, cream-based dish that was a beautiful magenta hue due to the generous ration of shredded radicchio.  The dish is probably not for everyone but we liked it very much.  The bitter chicory still had a nice kick to it even though it had been slightly cooked down and tempered somewhat by the cream.  For months now I’ve been meaning to try this at home so I was happy to be able to cross this off my list, finally.

I’m learning that radicchio–and other members of the chicory family–are quite common in Italian cooking.  There are a few varieties, the most popular being the Radicchio Rosso.  Unlike the cabbage-shaped ones we are more familiar with, the Radicchio Rosso is shaped more like its paler cousin, the Belgian endive but still possesses the maroon leaves albeit with white veins.  Until that night in Rome, I’d only ever had radicchio grilled, roasted, or raw.  Having it in a pasta dish was a nice change.

The version we enjoyed in Rome was mildly rich due to the cream and while I don’t shy away from the latter when dining out, I always seem to pull back when I cook at home.  Perhaps I follow the adage “ignorance is bliss” but at home I can’t bring myself to add a cup of cream to a savory recipe.  Honestly, I’d rather have that much cream in the form of ice cream, right?  Hence, my version is a little different but the radicchio remains the star. 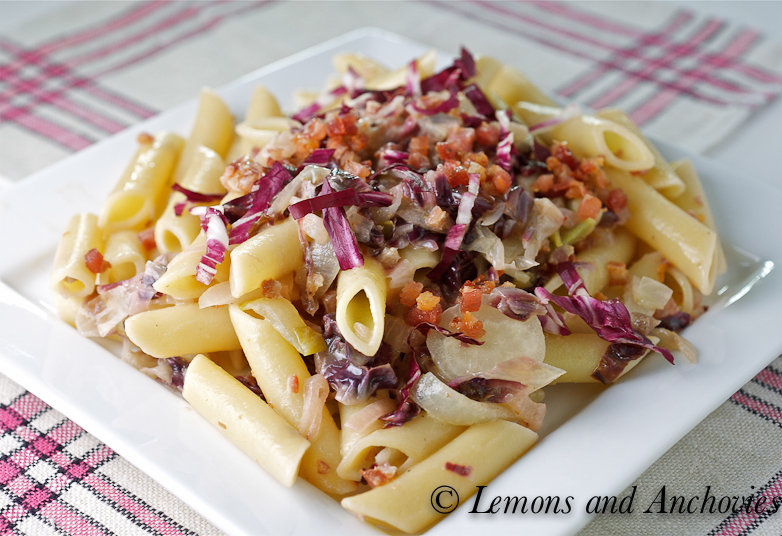 In my version, I used a combination of radicchio and Belgian endive, chicken stock, white wine, half-and-half and some pancetta.  I’m not sure that I reduced the calories and cholesterol by throwing in pancetta but you can humor me, yes?  Either way, the resulting dish was considerably lighter tasting but still flavorful.  The radicchio mellowed out from cooking and I probably should have added the other head I left out at the last minute.  Still, the wine added a level of complexity that preserved some of the strong notes of the vegetable.  The shallots and Belgian endive added sweetness, the fresh lemon juice a tart contrast and the pancetta a good dash of savory, salty, porky goodness.  I actually didn’t mix the pancetta into the entire dish since my husband didn’t want it, so I topped my plate with it.

I would definitely make this again.  Not one component overpowered the others; instead, they complemented each other really well.  I think this will be a good addition to my spring/summer pasta rotation.  Feel free to adjust the ingredients to your liking.  Of course, this will be my entry for Presto Pasta Nights.

Cook penne until al dente and set aside (or you can cook at the same time as the sauce like I do since this entire dish comes together so quickly).

In a large sauté pan, brown the pancetta pieces and set aside.  Discard most of the rendered fat leaving about 1 tablespoon in the pan.  Add some olive oil and saute the shallots on medium low heat until translucent, about 3-4 minutes.  You can add the red pepper flakes if using.  Add the wine and allow to reduce for a couple of minutes.  Next, add the chicken stock and season with salt if you think it needs it.  At this point, I started squeezing a tablespoon of lemon juice at a time.

Add the radicchio, cover the pan and allow to cook for about five minutes.  This will cut most of the bitterness of the radicchio.  Next, add the cream and allow to heat up in the pan, add the Belgian endive and toss the pasta.  You can top with Parmigiano, the cooked pancetta and another squeeze of lemon juice.  Please note that the sauce won’t look sufficient in the pan but the ingredients combined will provide quite a bit of flavor without being too rich.  Enjoy!