A good Filipino adobo is all about the proper vinegar/soy sauce ratio. I also share some cooking tips to make this throw-it-all-in-the-pot recipe a winner.

[For my Instant Pot version of chicken adobo, you can find the recipe here.] 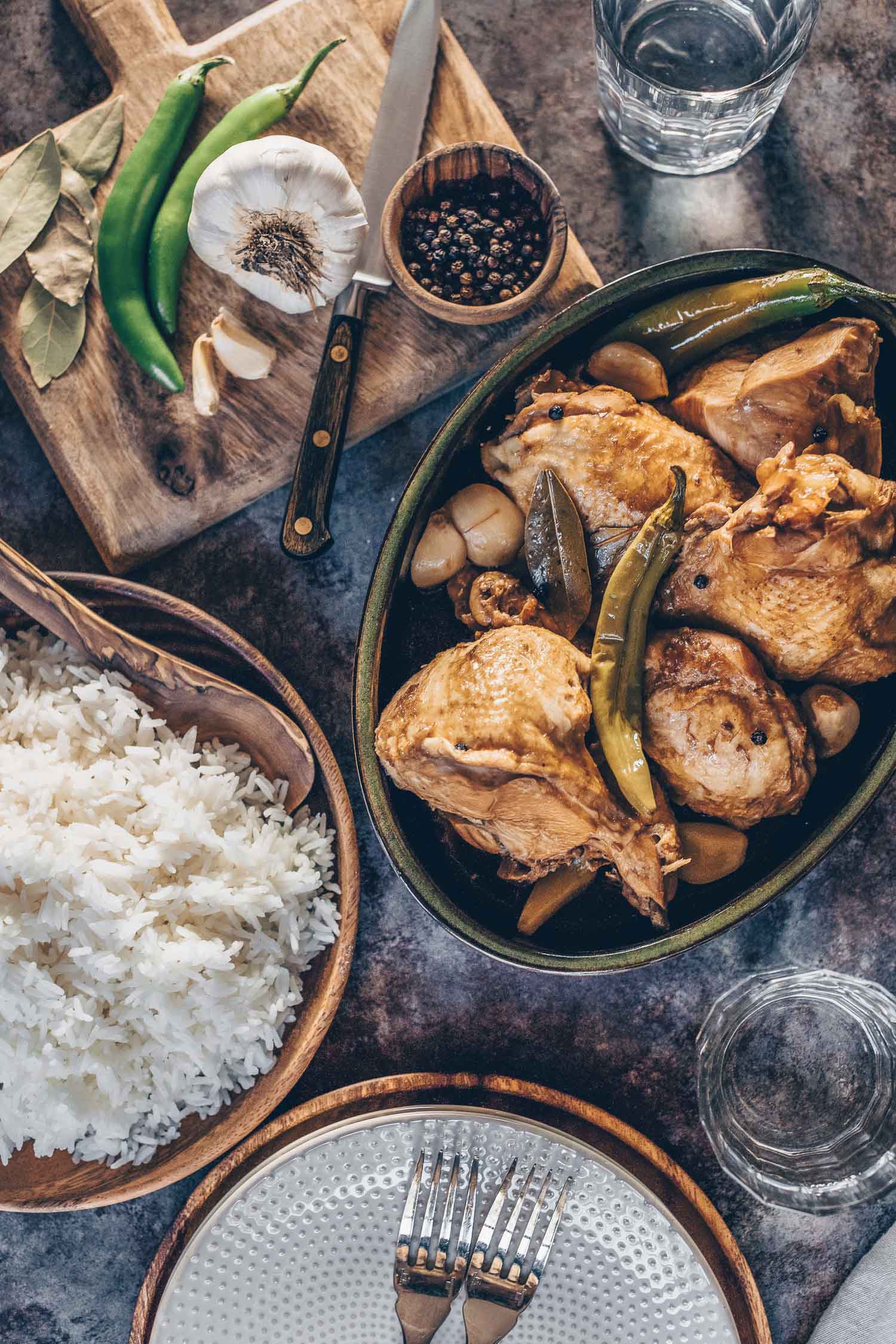 I woke up this morning with a dry, itchy throat. I had been dreading this since the past weekend when I first suspected that I might have been exposed to a nasty bug while out and about. I kept an optimistic attitude all morning, hoping that I would be able to fight this attack on my body but my head felt cloudier with each passing hour and by noon had given up all hope of being productive and succumbed to lethargy.

I had a pot of broccoli-carrot soup from last night so lunch required no effort at all and a light nourishing soup may have been what my ailing body needed but I’ll be honest–when I feel under the weather my cooking just doesn’t satisfy like my mom’s does. 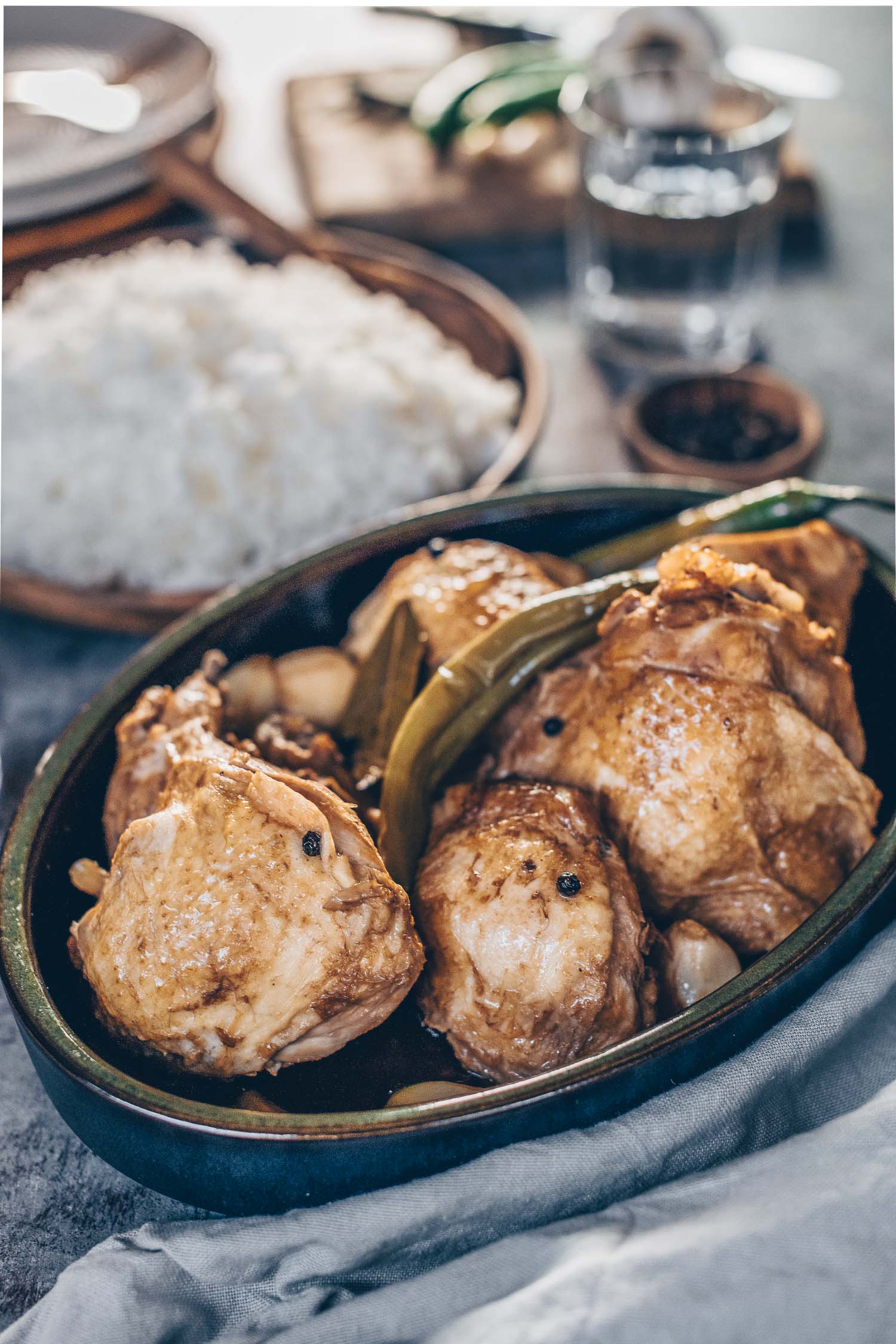 There’s never a time when I don’t feel in the mood for my mother’s cooking but on days like this I crave it more. She lives two hours away so I can’t just show up at her doorstep and yield to her demands to feed me (being sick is never a prerequisite for this, by the way).

What’s the secret anyway? Why is mom’s version of a dish (yours or mine) always the best? Is it familiarity? The TLC that she lavishly seasons every dish with? It’s most likely a combination of the two and I’ll admit that I’ve been trying for years to capture that “mom essence” in my cooking and for some dishes from my childhood it’s taken some trial and error. 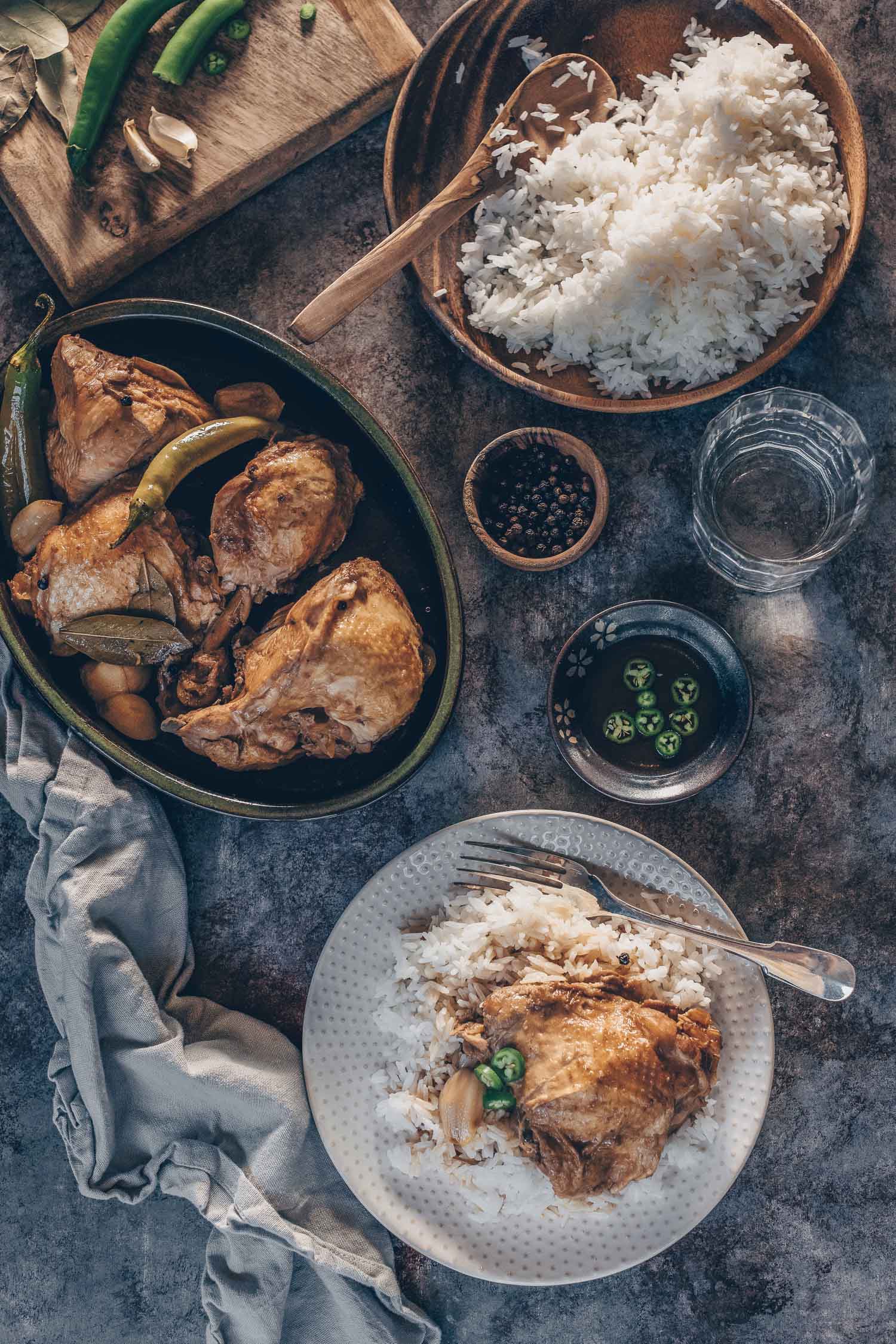 Adobo was one of them. This is the unofficial national dish of the Philippines with as many versions as there are home cooks. With only a handful of ingredients you’d think I would have been able to get it right the first time, but no. My adobo failures covered the spectrum–too salty, too sour, too sweet. I was Goldilocks who couldn’t achieve the right balance of flavors.

And, I say this respectfully, my mom was no help. She never measured her ingredients so I was always lost in her “just a little of this” or “just enough of that” or “taste as you go”. Her secret was in those loose descriptions and I aimed to find the key.

It might sound like I’m complicating something very simple but for me, the key to a good adobo is having the right balance of acidity and saltiness so that it’s complex instead of cloying. The flavor of adobo improves over time, making it ideal for cooking in large amounts since leftovers on day two, three, four or even five taste better (cooking in vinegar acts as a natural preservative so there’s no risk of spoilage).

It’s also at the leftovers stage that sweetness develops under the acidity; as you reheat adobo its flavors become more concentrated. One of my early, failed attempts tried to capture this sweetness by adding sugar but I don’t recommend this approach. In my opinion, if you don’t get the balance right when you cook it, it doesn’t get better later. The right amount of acidity is everything and also key to keeping the adobo from tasting flat as you reheat it. 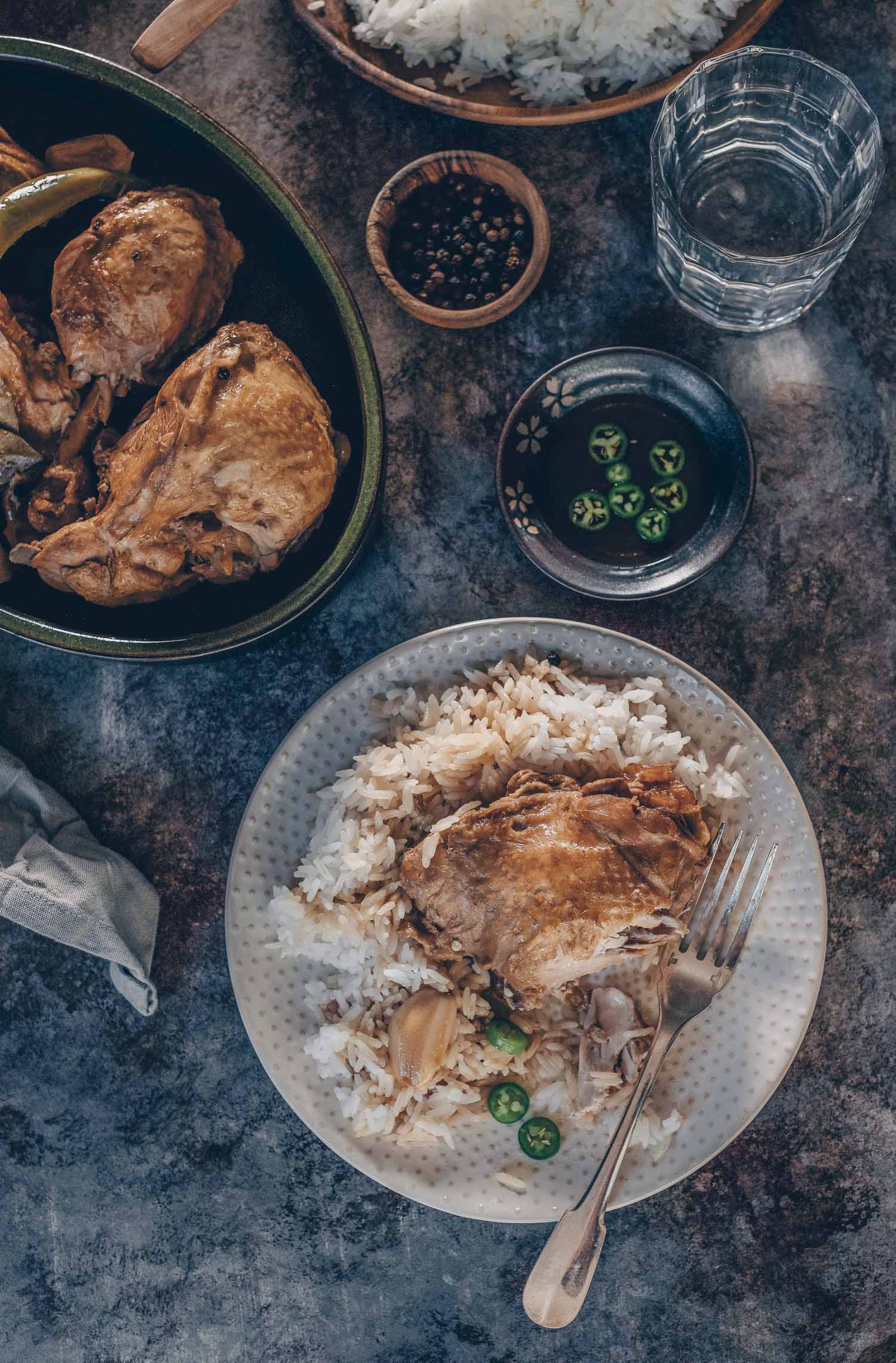 So What’s the Magic Ratio?

To capture the magic of my mom’s adobo, the ratio is 2:1, two parts vinegar to one part soy sauce. Other Filipino cooks might disagree and I would understand since there’s no right or wrong combination but this is my standard.

Over the years I’ve also fine tuned the proper amounts of water and garlic to optimize the flavor of the sauce. You want just enough water to cook the meat and it’s important to remember that as the adobo cooks in a covered pot, the steam will turn into more liquid so you can’t add too much at the start. As for the garlic, I use an entire head, crushing one third of the cloves to flavor the sauce and the remaining two thirds I leave intact to soften and absorb the salt and vinegar magic, perfect for slicing up and adding to adobo fried rice leftovers later.

My version of adobo starts out with lots of sauce but it reduces and thickens as it is reheated. If you’re a sauce hog like I am and like to drown your rice with it, you’ll find yourself short on sauce soon enough. If this happens, you can add a small amount of water, vinegar and soy sauce as you reheat it, keeping the ratio the same. The balance of flavors is not compromised.

One of the best things about adobo is how no-frills it is. You can marinate the chicken first if you wish and/or you can brown the meat before you cook it but if you’re pressed for time, you can skip these steps without compromising the finished product. The chicken absorbs flavor as it marinates and browning the meat adds depth but for years I watched my mom just throw everything into the pot and her adobo was flavorful, never lacking. The cooking time is sufficient to build all the adobo flavor I want and, as I mentioned earlier, more complexity develops as it is reheated.

Whatever approach you take–the no-frills route or going all out–keep this 2:1 ratio in mind. If this recipe turns out not to be the final stop in your adobo journey, it’s a good starting point, at the very least. That first time I captured the elusive mom essence in the adobo that I prepared I got off the bus and never looked back. 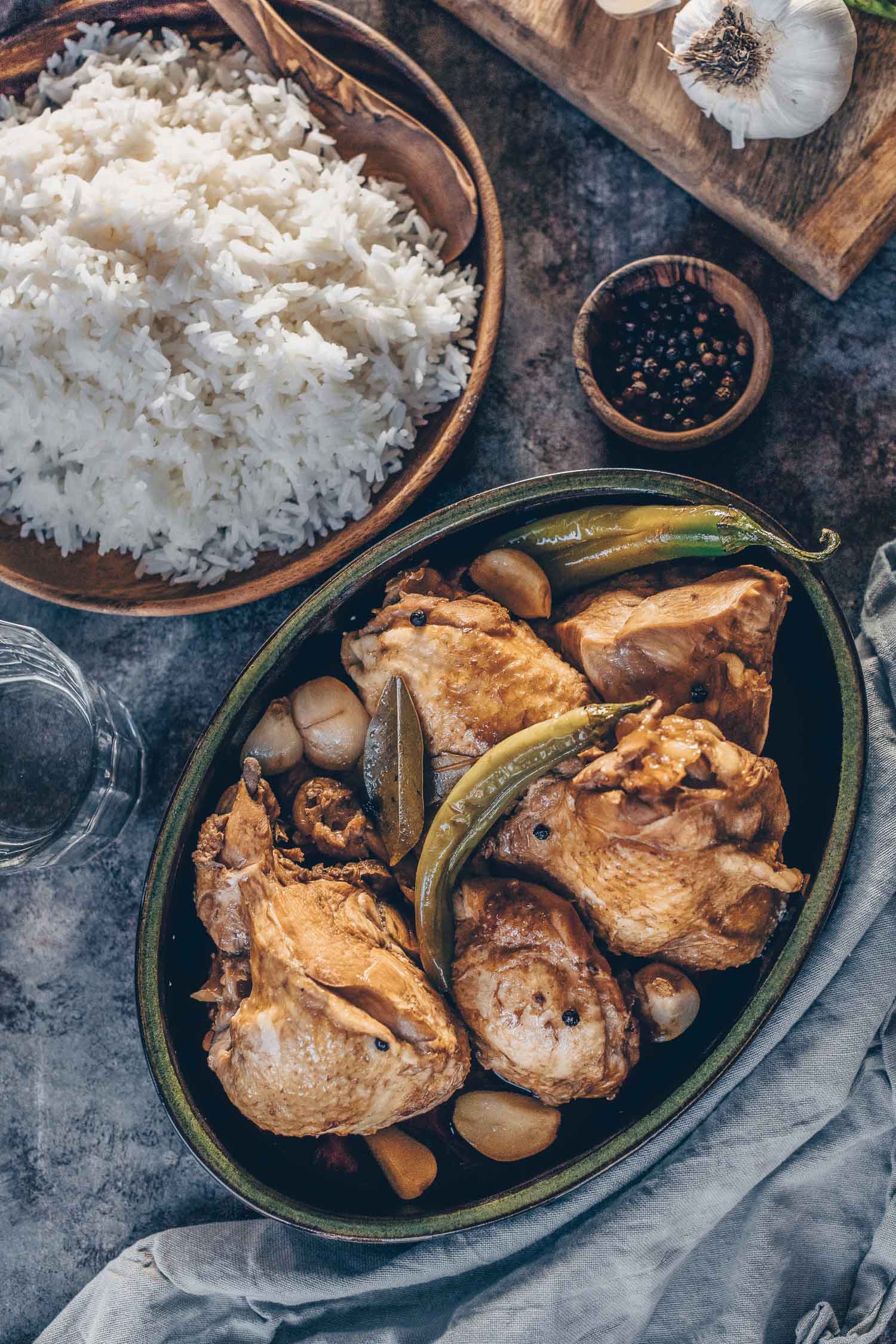 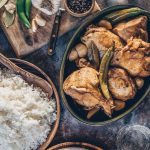 A good Filipino adobo is all about the proper vinegar/soy sauce ratio. Follow my tips to make this throw-it-all-in-the-pot recipe a winner.

Marinating and browning the meat before cooking:

Marinating and/or browning the chicken before cooking it adds color and  additional flavor but are not absolutely necessary. The chicken absorbs a lot of flavor as it braises in the vinegar/soy sauce even without these steps. Also, this is a dish that improves over time so reheated leftovers have more complex, concentrated flavor.

For Larger Quantities of Meat:

For over five pounds of chicken you can use 1 cup vinegar and 1/2 cup soy sauce.