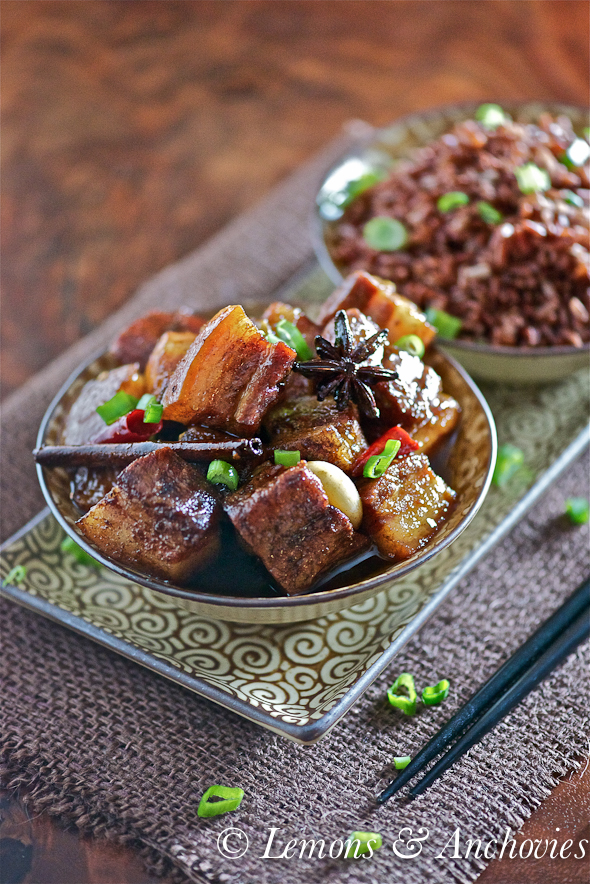 This season of healthy eating lasted, oh, about 5 minutes?  I finally got around to buying a slab of pork belly (I’ve eaten it but have never cooked with it) so I could roast it and make some pork buns Momofuku-style.  There’s a noodle shop in Maui that serves them (in fact, a lot of their dishes, it seems to me, have been “borrowed” from the David Chang cookbook).  I’ve visited three times in as many trips.  The first time my husband and I ended up leaving after a 45-minute wait at the bar without being given a table despite several that became available during our wait.  I returned on a subsequent trip; they were new then and might have still been trying to figure things out.  This second time I got to sample the food; while not excellent their ramen did satisfy my noodle cravings and their pork belly buns were nicely done.  The pork strips were nicely caramelized and crisp, served with pickled veggies and sandwiched between a soft, steamed bun.  On this last visit I again ordered a bowl of ramen and the pork belly buns, only to be disappointed.  The noodles were too soft and the pork belly limp and flavorless.  Unless I get desperate for a noodle fix, I’m not sure there will be a fourth visit. 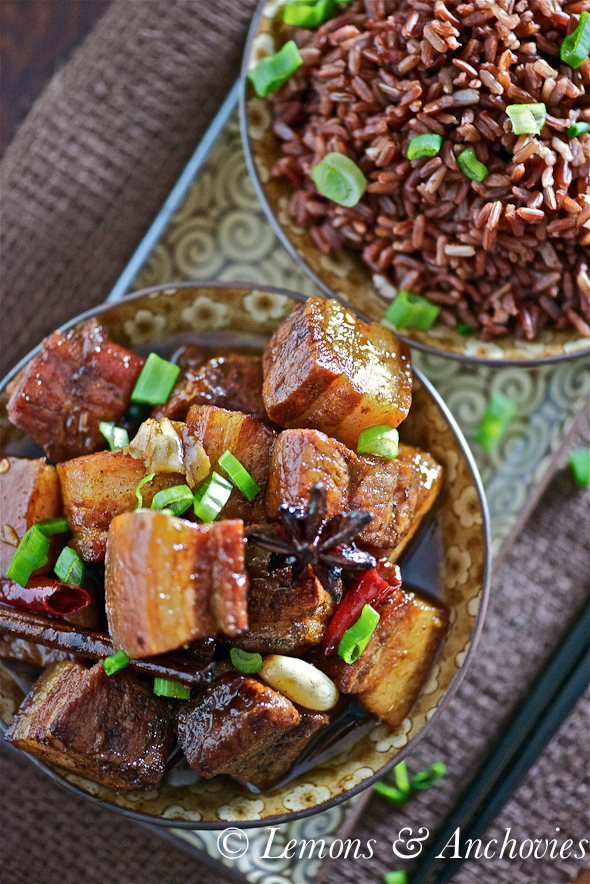 Truthfully, I prepare healthy meals at home most of the week.  I bend the rules once in a while just to satisfy my cravings.  I prepare pork once or twice a month (if even that often), chicken once or twice a week and beef very rarely (usually when company’s around).  The rest of the time it’s fish and vegetables.  So I didn’t feel too guilty about having a slab of fatty pork belly in the refrigerator but each day that passed lowered the possibility of pork belly buns happening in my kitchen.

I simply had no time.

And I wanted to make sure my version would be worth writing about so I wouldn’t have to eat my words for being so critical of my experience at this Maui restaurant.

Time was running out–I don’t like for meat to sit for too long in the refrigerator for too long.  What happened instead was this braised dish.  I’ve also long wanted to try Chinese-style braised pork belly.  I used the spices typical for the dish but also improvised with method and by adding an ingredient or two.  I skipped the rice wine and the sugar but I used kecap manis (sweet soy sauce) to sweeten the dish a little.  I added cinnamon just because, I added a splash of vinegar and used chicken stock to add more flavor to the braising liquid.  My biggest departure from the traditional preparation was that I baked the pork first.  My intention was to broil the meat to create a crisp exterior so it wouldn’t fall apart while braising but all the fat being rendered scared me (I tried broiling and lasted only five minutes).  I was afraid I’d start a fire in my oven.  Instead, I baked the pork for under 30 minutes–I’m not sure that this helped much but I liked that the five spice powder adhered to the meat better and lent a lot more flavor to the finished product.

The result was a cross between Chinese braised pork belly and Filipino adobo.  I really liked the delicate flavor from the spices and my use of sweet soy sauce and vinegar kept the dish from being too sugary.  My first taste reminded me of Filipino estofado, another slightly-sweet braised pork dish.  Overall, I was very happy with how this turned out.  Just so you know, I never actually eat the fat so there was very little meat to enjoy here.  The fat does impart a lot of flavor but I would use a combination of meats next time.  It’s all about the glaze, after all.  It’s what I drizzle over hot, steamed rice.  That’s the best part! 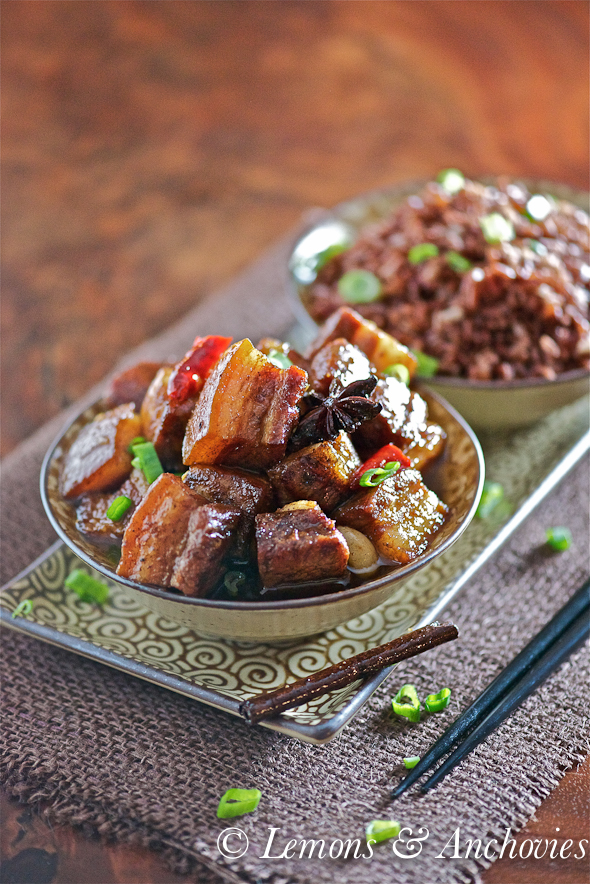