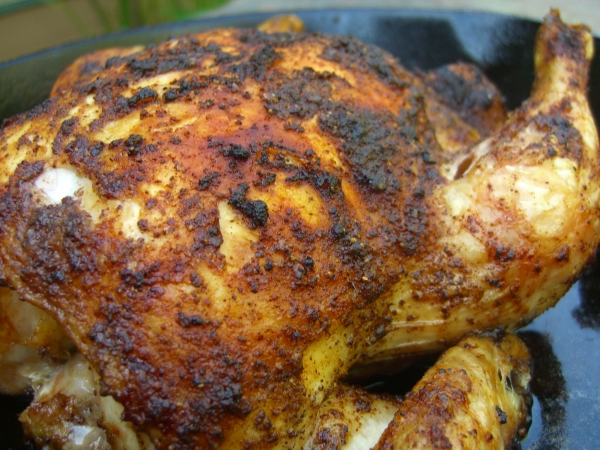 Why am I so gullible when it comes to roast chicken recipes?  If it claims to be perfect, I believe the promise.  It seems the recipes I select don’t even vary too much at all–the herbs and spices may change a bit–but yes, I always end up thinking I’ve made the perfect roast chicken…until the next time.  Therein lies the appeal, maybe.  It’s really hard to get such a simple dish wrong.

Beyond picking a good, organic chicken to begin with, I believe that a successful roast chicken is not so much about the ingredients but more about how it’s prepared.  Salt early.  If you have time to salt your chicken (or beef, pork, etc) a day or two in advance, it really helps to boost the flavor and texture of the meat.  The first benefit of salting any meat is perhaps common knowledge:  It tenderizes the meat by breaking down some of the proteins around the muscly fibers.  The second benefit is actually counter-intuitive:  The salt increases the moisture of the meat rather than taking it away.  Yes, water is drawn out of the meat by the salt initially, but the moisture eventually gets reabsorbed–this time–seasoned with salt.  It works.

Having said this, I know that life can sometimes get in the way of a good salting, so if you can manage it for just an hour or two before roasting the bird, it would help, too.  This was the case for me yesterday, so I did an even quicker version of an already easy preparation.  I didn’t stick any butter under the skin, I didn’t stuff the cavity with lemon and rosemary, I didn’t partly roast the chicken breast-side down, nor did I baste it, not even once.  And you know what?  It was fine.  In fact, the breast was still juicy and the skin was nicely crisp–including the skin on the underside thanks to my cast iron skillet (yes, I do have other pots and pans).  I was so happy that I don’t think I’ll be looking at a new recipe anytime soon.

Rinse the chicken thoroughly and pat dry with paper towels.  Combine the spices above and add just enough olive oil to make a loose paste.  Rub the inside and outside of the chicken with the paste and let marinate for at least an hour or two.

When you’re ready to roast, preheat the oven to 425º.  Place chicken on a roasting rack and bake for about an hour or so.  I do follow the 20-minutes-per-pound rule, but I use the convection feature of my oven and I’ve found that this reduces my cooking time by almost 25%.  Depending on the size of your bird, I would use a thermometer to check for doneness after about an hour.  After roasting, let sit for 10 – 15 minutes before carving.