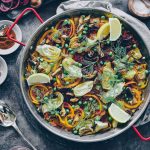 Squash and Beets: I didn't want to crowd the top of the paella so I only used 1/2 the spiralized portions of each. I sautéed the remainder separately and served alongside the paella.