The addition of almond paste elevates this rustic apple galette and best of all, you can mix the dough by hand. It doesn’t get easier than this.

When outfitting our kitchen in Idaho I tried to be mindful about bringing in only the appliances/tools that would get the most use (I’m determined to have a clutter-free kitchen). A Vitamix is essential for morning smoothies and I was able to select a model that came with a food processor attachment so it meant requiring only one heavy base for two appliances. My bread baking tools are a given so an enameled dutch oven, scale and proofing baskets were at the top of my kitchen list during the initial move-in. I ultimately opted out of a toaster oven even though I’d coveted one for years after a gentle reminder to myself that not having one for last 20 years meant that I could probably live without one for the next 20.

To have or not to have a stand mixer has been the harder decision to make. My 20 year old Kitchenaid here in the Bay Area now lives under the counter, its heyday coinciding with my obsession with French macarons some years ago. These days a hand mixer is sufficient for most jobs and it hardly gets much use anymore either.

But I love to make fresh pasta and my pasta maker attachment requires the mixer base. This is the dilemma and admittedly not one I’m losing sleep over but I might just solve the problem by buying an old school, hand crank pasta machine.

At least this galette will never call for special equipment–not even a pastry cutter–which must be why it’s been on repeat for a year. I mix the dough by hand in a bowl, first tossing the dry ingredients together then pinching the butter between my fingers to form large slivers then adding just enough ice water to bind the flour and fat together. There’s no need to turn the dough out on the counter; I press it into a ball right in the bowl, wrap it in plastic wrap and it’s off to the refrigerator to be chilled. It’s quick, easy work but one I’ve found to be therapeutic…and mess-free. This is much better than previously having to carry my heavy food processor from the pantry to the counter and spending minutes cleaning several pieces for a few seconds of pulsing the ingredients.

Besides being easy, this galette has the added feature of being positively delightful. There’s no shortage of apple desserts in this blog but this particular one was loosely inspired by David Lebovitz’s popular Apple Frangipane Galette prepared by my friend Georganne last year, our last hurrah together right before Covid.

Apple Galette with an Almond Layer

My galette uses the same apple-almond combination (which I love) but instead of preparing frangipane I dotted the rolled-out dough with slivers of store-bought almond paste before layering the apples. Frangipane isn’t hard to make (my recipe for Strawberry-Frangipane Tart here) but all the nurturing time I’m willing to devote to baking projects lately seems to have gone towards bread making.

I’ll never say no to a classic apple galette but the little hint of almond in each bite has been a welcome addition. The simplified approach doesn’t hurt either. Even with only a partially-outfitted kitchen in Idaho last summer, before the appliance orders started to come in, I could easily make this galette since all it required were the most basic kitchen tools. It’s a good thing, too, since I seem to be no closer to making a decision about that stand mixer. 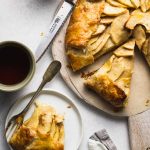 The addition of almond paste elevates this rustic apple galette and best of all, you can mix the dough by hand. It doesn't get easier than this.

For the Galette Dough

Filed Under: Sweet Treats, Tried and True Tagged With: dessert

Leave a Reply to Karen (Back Road Journal) Cancel reply