Kumquats are bountiful in my garden this time of year and next to popping them into my mouth right off the tree this ultra simple, small-batch kumquat marmalade is the next best way to enjoy them.

It took a few years but my kumquat tree has hit her stride. Maybe it was last year’s pruning or fertilizer feedings or all the rain we’ve had this winter–she’s loaded with fruit now with no signs of stopping production.

Whatever this kumquat bounty should be attributed to I can’t say for sure but we’ve certainly been reaping the rewards.

The thin orange skin of a kumquat is edible and sweet, a nice contrast to its tart flesh. Apart from using them as a garnish in salads most of our kumquats never make it to the kitchen because my husband and I usually just pick them off the tree and pop them right into our mouths.

But we haven’t been able to consume them fast enough this way so with the abundance this season I was able to finally give homemade kumquat marmalade a try.

This is the Easiest Kumquat Marmalade Recipe Ever

I wanted an easy, small-batch marmalade recipe that–if you’ve been visiting this blog for a while now, you’ll know what’s coming next–wouldn’t be too sweet. Most of the recipes I came across either had too much sugar or involved an overnight wait, pith removal, reserving the seeds (and sometimes also the pith) to act as natural pectin or added pectin.

I did briefly consider adding Grand Marnier or Aperol–later I decided that the latter might amplify the bitter notes of the kumquats too much–but simplicity won in the end. I rifled through my old cookbooks remembering that I had come across a kumquat marmalade recipe years ago and I found it in Alice Waters’ Chez Panisse Fruit.

To my delight her recipe called for just kumquats, sugar and water without having to blanch the fruit or save the seeds. However, I suspected that her recommended amount of sugar might still be too much for us so I cut it by 30% and it worked perfectly for me and my husband. I also decided to add a little Meyer lemon juice to up the brightness and this worked well for us, too.

Perhaps the least desirable part of preparing kumquat marmalade is removing the seeds while slicing them. It took a half hour to slice and deseed one pound of kumquats but the results were worth the effort so don’t be discouraged if you try this recipe.

The marmalade is light and bright, showcasing the sweet, tart, slightly bitter quality of the kumquats instead of drowning in sweetness. The reduced sugar content turned out not to be a problem either. I just gave my small batch an extra few minutes on the stove at a soft boil since I couldn’t find my thermometer and was too lazy for the freezer test–the marmalade thickened beautifully anyway.

Out of two jars this recipe makes we’re down to our last little bit since we’ve been spreading it on all the bread I’ve been baking lately. I’ve been on a sourdough kick, experimenting with different flavor combinations and simplifying my no-knead technique. I’m up to three sourdough recipes so far and counting. I’m excited to share one recipe in particular because of how easy it is–if you’ve hesitated to bake with sourdough before, this might just change your mind. Stay tuned. 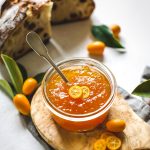 This super easy, small-batch marmalade is a great way to use kumquats when they’re in season.

This recipe is only mildly sweet. If you prefer a sweeter marmalade, add more sugar according to your taste (2 – 2 1/2 cups). The mixture will thicken faster with more sugar.