This salad is similar to Lebanese tabouleh but with a tomato/red pepper base. It’s full of fresh flavor from herbs and tastes even better two to three days later. 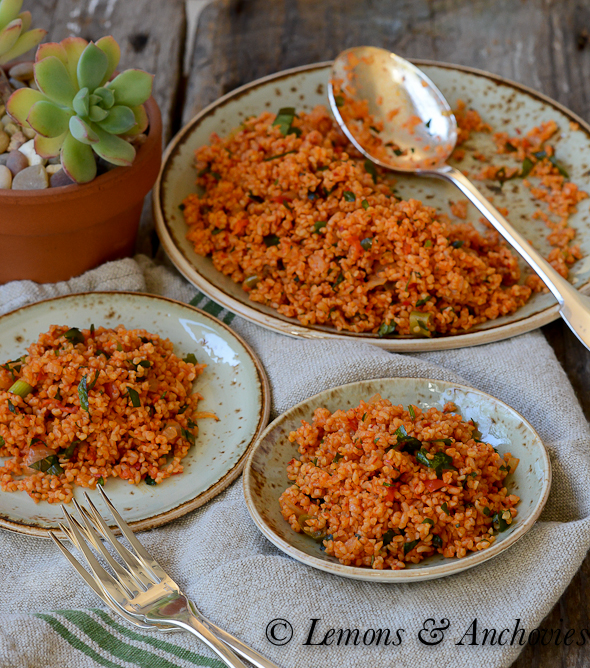 The woman behind the deli counter watched me patiently as I scanned my options for lunch.  There were the usual offerings–various salads, several proteins and other pre-cooked dishes. Over the years, I’d tried almost all of the salads at my neighborhood market but I would always opt out of one, an orange-colored, grain-based salad that sits next to the tabouleh. Early on I’d made assumptions about its texture and taste–grainy and bland–and decided that it was not for me.

On this day the nice woman, as if knowing my odd aversion for this salad, said, “Why don’t you taste this cracked wheat salad?” She spooned out a small portion for me while I prepared to say, “No, thanks, I’ll try something else.”

But that’s not what happened when I politely took a taste. Instead of bland, the toothsome grains were coated with the bright flavor of fresh herbs and mild zing from its other ingredients. It’s not unlike tabouleh–they originate from the same part of the world–but they do have a different flavor base. My taste buds danced as I polished off the sample, quietly admonishing myself for the deprivation of this pleasure for so long. I brought home a pint with me that day and I’ve enjoyed it as a mid-week treat since (it’s only available on Wednesdays). 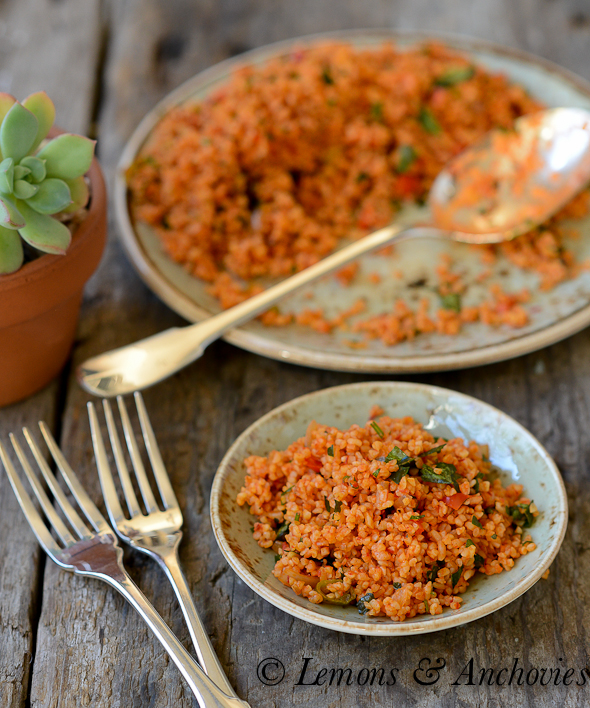 Before long it was no longer enough to only have it once week so I set off to get the recipe. A little sleuthing led to the discovery that the company who sells this salad is something of a San Francisco institution. James Beard was a fan of the store the family ran for almost 60 years (it opened 1956) and Robin Williams was a fan, too. As soon as I learned that Haig’s Delicacies was the company supplying this salad it became clear why I liked it so much–their hummus is the only store-bought version I like. It was no surprise, then, that their cracked wheat salad recipe would be a guarded secret. The woman at Haig’s graciously sent me on my merry way, making sure to bid me good luck with my recipe search. The brief conversation was not entirely fruitless, however, as a passing comment of hers clarified a couple of questions I had had up to that point.

What is Cracked Wheat Salad?

When you search for “cracked wheat salad” on Google the top results will be for kisir, a Turkish bulgur salad. In fact, I followed that trail so excitedly that I was convinced my search was over. However, the handful of recipes I bookmarked all varied in the use of two key ingredients: red pepper paste and pomegranate molasses. Half of them used one or the other and the rest both or not at all. The woman at Haig’s was reluctant to reveal this important detail but the biggest takeaway was her mention that Haig’s was an old Armenian recipe.

So rather than kisir, I have been enjoying eech (or Ich). The two dishes are popular mezes (small plates) in Mediterranean/Middle Eastern cuisine. Kisir and eech are very similar, though the latter doesn’t seem to use pomegranate molasses (at least in the recipes I found).

Difference Between Bulgur and Cracked Wheat

Interestingly, though the company calls this a cracked wheat salad, it is widely known as a bulgur salad. The bag of wheat I bought from the Mediterranean market used the two terms interchangeably and for this recipe it might not matter which you use. But for reference, while both cracked wheat and bulgur are wheat berries in small pieces, the former is in its raw form while the latter is par-boiled and dried. The only consensus seems to be the size of the grain to use: #2 medium, which is very easy to pick up at any Mediterranean/Middle Eastern market. In fact, I thought that red pepper paste and pomegranate molasses would be hard to find but like the countless options of bulgur I found, they area also staple items at this market.

So here is my recipe. I took great liberties with proportions and preparation since there were no two recipes that were even close to being the same. Some pre-cooked the vegetables and the rest didn’t. I added and mixed the ingredients one tablespoon at a time, tasting, tasting and tasting some more until my taste buds were satisfied that I had cracked the code on this dish that inspired my little adventure. If you try it, feel free to make it your own and let your own taste buds dictate the proportions. Just use my recipe as a guide. It’s so easy, you really can’t get it wrong but you just might have a new favorite salad in your hands.

UPDATE 12/12/16: I have prepared this salad twice more since posting this recipe and feel I’ve improved it so the recipe as of today reflects changes in some ingredient amounts and the process for cooking the cracked wheat. 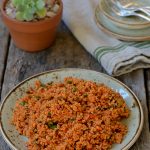 1. I use the Ziyad brand of Cracked wheat, #2 size. This cooking method is what works for this brand. Depending on the brand or size of grain you use, the cooking time may vary.
2. Start with the smaller range of the ingredient amounts. It's easy to stir in more as you taste.
3. The Hot Red Pepper paste is better for this recipe. It's not spicy at all but somehow it has a better flavor. I use the Sera brand. For the tomato paste, I use the Tukas brand. And for the pomegranate molasses, I use the Cortas brand. If you can find these items locally, the prices would be much more reasonable than ordering on Amazon. 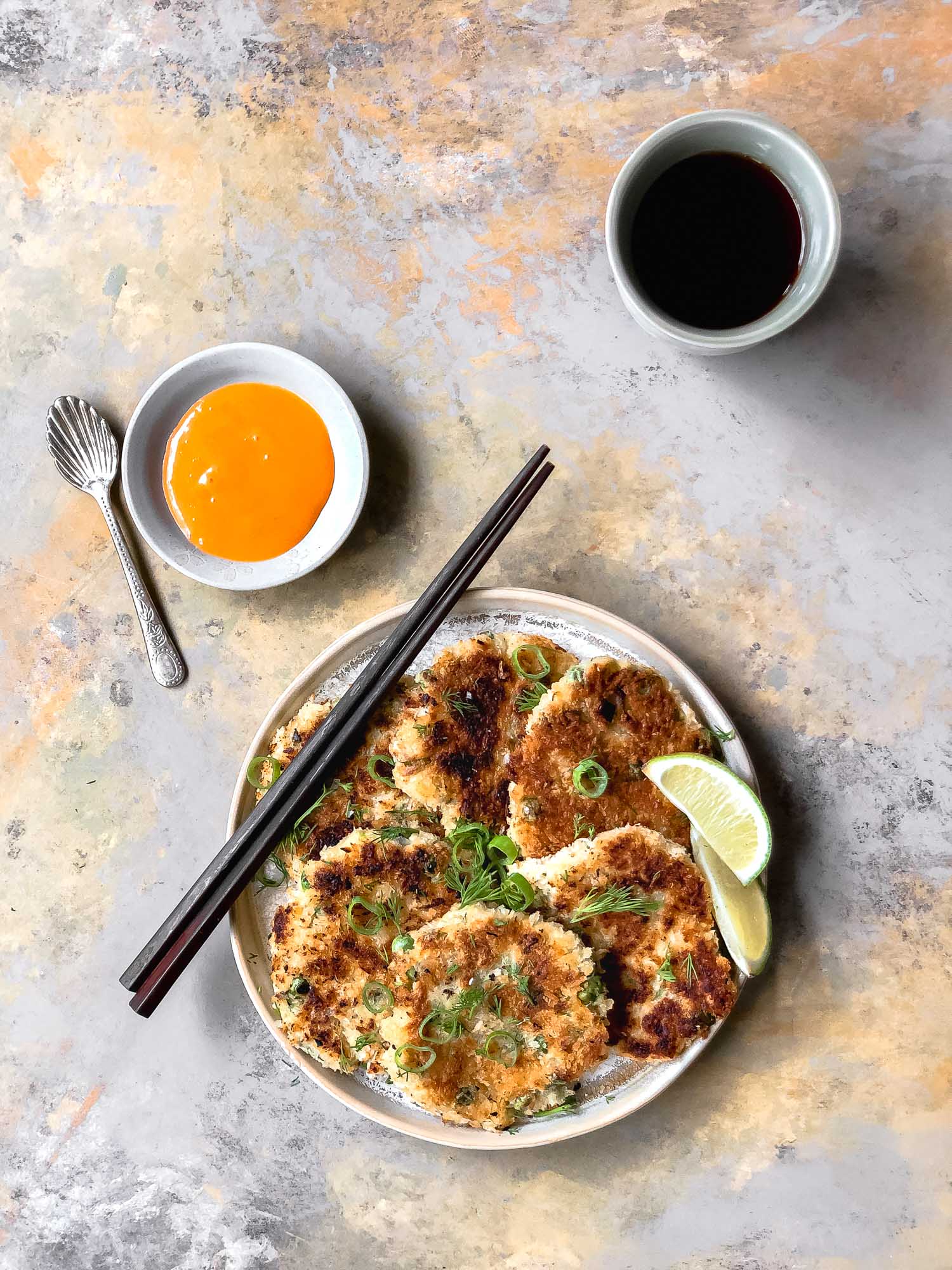