If it seems like it’s been awfully quite around here, it’s because my husband and I took off for a few days as soon as the skies cleared up.  We decided to fly down to Catalina Island, 22 miles off the coast of southern California.  After visiting the main city of Avalon a few years ago, we decided to explore the less busy Two Harbors next, the island’s unincorporated village. 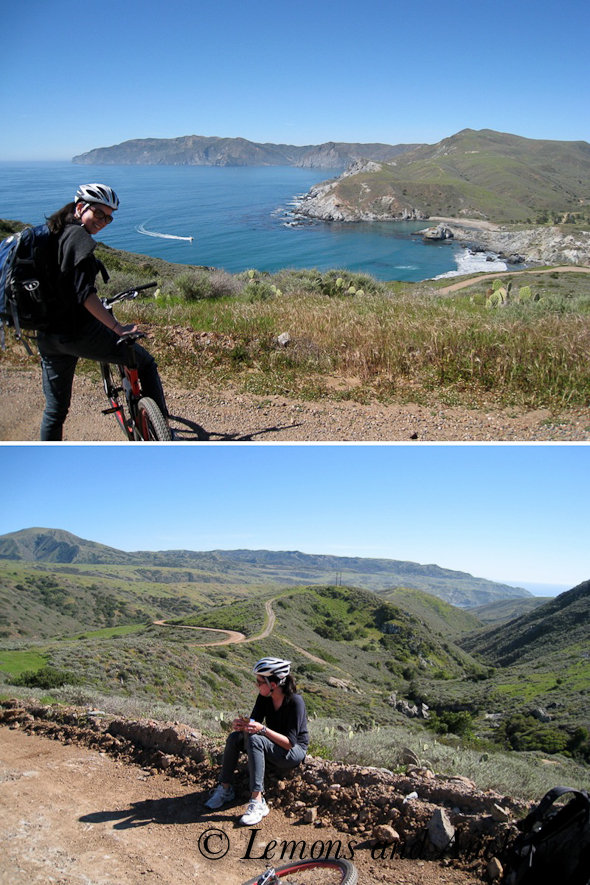 Top picture shows me happy, oblivious to the pain ahead. Bottom picture shows me out of energy, halfway to Two Harbors. No breakfast and no lunch, not a good idea. We started out at the top of the hill on the far left.

After an uneventful flight to the island (if you consider flying over the Pacific Ocean for 20 minutes in a small tin uneventful), my husband and I set off on our mountain bikes, packs on our back.  It was scorching hot in mid-afternoon when we arrived and I foolishly did not eat all day to prepare for what turned out to be a grueling bike ride to the village.  This was a stupid mistake on my part; as a seasoned rider, I should have known better than not to fuel up, oh well.  For you cyclists out there…I bonked.  Thankfully, we had plenty of water and Clif Bars to sustain me for the 2-hour bike ride. 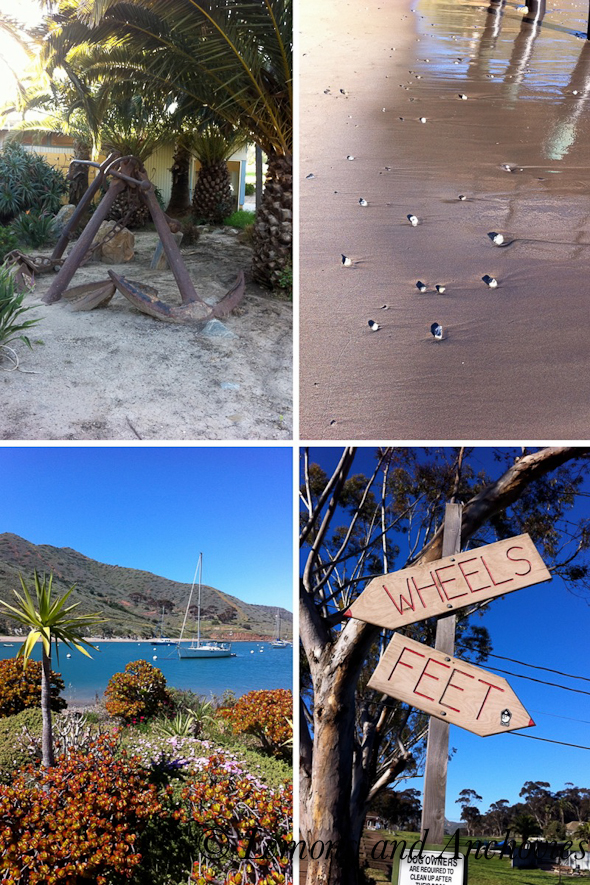 Once we arrived in Two Harbors, we were happy to see a quaint little village. With a population of only a few hundred, Two Harbors is a camping haven, quiet and rural.  The village caters mostly to campers and boating clientele and boasts only one restaurant, snack shop and B&B (where we stayed).  The charm is in making you feel like you’ve gone to a far away island though it’s accessible via a short ferry or plane ride. 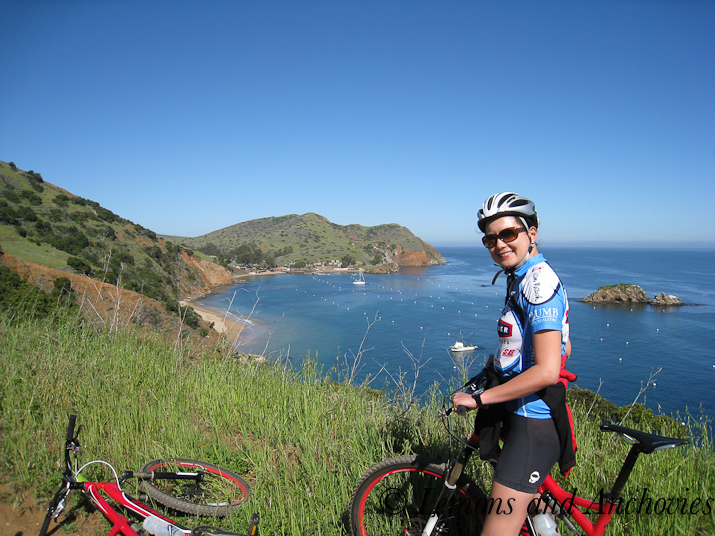 Clear blue skies welcomed us the next day and we set off to explore the coastline.  We “discovered” one beach after another, each one more beautiful than the next.  As it is quite early in the season and permits are required to drive cars on this part of the island (most of the island is part of a nature preserve), we had the road virtually all to ourselves, save for the occasional hikers, fox and one or two bald eagles flying overhead. 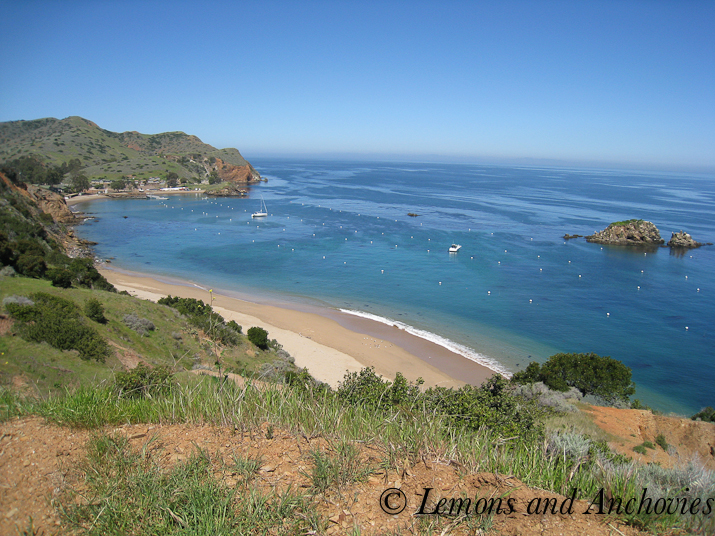 While much of the larger beaches are designated as camp spots we found one (picture above) that looked too inviting to pass up.  We left our bikes on the road and proceeded to the steep and narrow walking trail leading down to the oasis below.  The water was perfectly clear, blue and just as inviting as any spot on the Mediterranean. 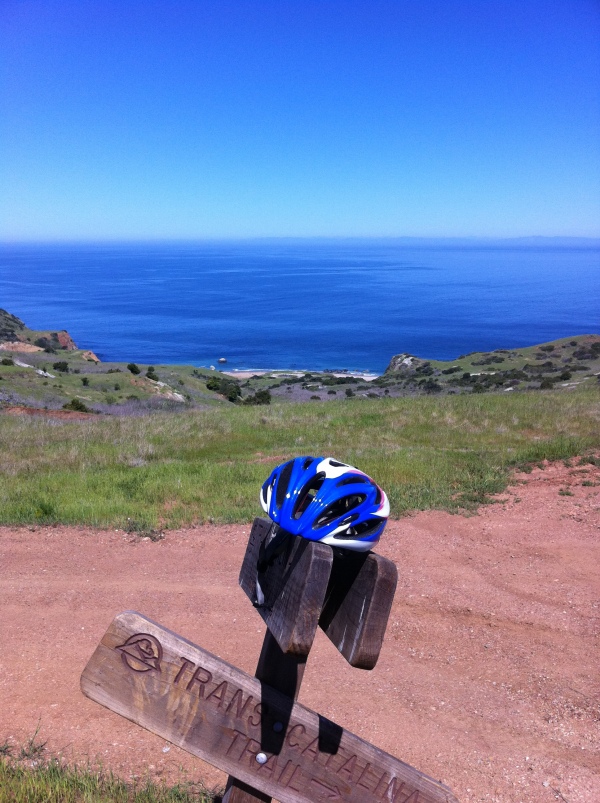 Considering an island that is 21 miles long and 8 miles at its widest point, we covered enough ground to 1) decide that we would plan a return trip and 2) earn a couple of buffalo burgers two days in a row!

The third day met us with a bit more challenges.  Low fog over the island’s airport had us considering an extra day in Catalina but we took our chances and took off on our bikes early in the morning.  I would like to add that though one backpack may seem like traveling lightly, I learned that just because something will fit in said pack doesn’t mean that it should actually go in it.  I had an extra 20-pound load on my back with what I considered “essentials” at the beginning of the trip that ended up being unwanted weight in the end.  Still, I fared better on the 3-hour return trip thanks to a good breakfast beforehand.

The highlight of the ride, though it should have been the breathtaking views along the way, was our encounter with a large herd of buffalo (technically bison) as we neared the airport.  Earlier in the morning, we rode cautiously by one as it grazed not more than 10 feet away from us.  We thought that was a story worth telling on its own; little did we know what was ahead.

Do you want to know an easy way to forget how tired you are from riding and get the adrenalin pumping again?  Try pedaling by a few dozen buffalo, all of them watching you as they stand at the side of the road in their 1000-2000 pound glory. My husband took a few videos of the experience and since I wasn’t able to post them here, I’ll share them on my Facebook page here. It was an exhilarating experience to say the least!

To close our adventure, we did manage to fly out of Catalina after a small patch of blue sky opened up for a few minutes.  A thick layer of clouds hid the Pacific Ocean below us from view as we crossed it but we were home less than three hours later loaded with great memories of our short trip. 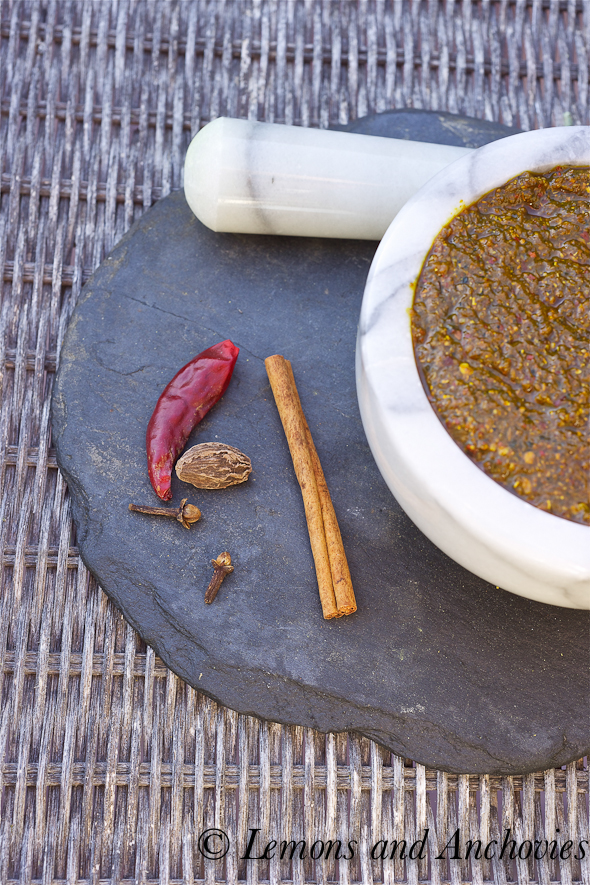 So you might have wondered what I posted for Teaser Thursday.  I finally got around to making my own curry paste.  It had been on my to-do list for such a long time and I was very happy to finally have a go at it.  I do plan to use the paste for more traditional curry-based dishes but I did have a specific dish in mind for this batch.  Stay tuned for the upcoming post! 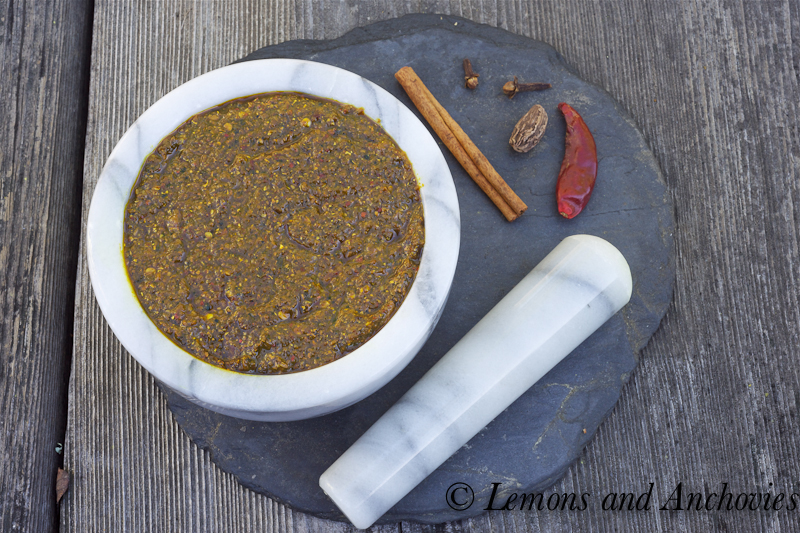 Begin by toasting pepper and spices (not the turmeric powder) in a dry skillet over high heat.  Toast individually.  The peppers will take 1-2 minutes to be lightly toasted.  The whole spices, in single-layer batches, will take only a few seconds until they are aromatic.  Shake the whole spices in the pan to keep them from burning.  Set each aside as you finish toasting them.

Once the spices are toasted, combine them with the peppers and use a spice grinder until you have a fine powder.  Transfer to a bowl and stir in the turmeric powder and ginger.

Heat the oil in a skillet over medium heat.  Add the curry powder and cook, stirring, for about 2 minutes.  I will add here that the original recipe specifies heating the oil until almost smoking but I feared burning the spices so I did not allow my oil to get too hot.  I also only cooked the paste for about a minute before I took it off the heat. 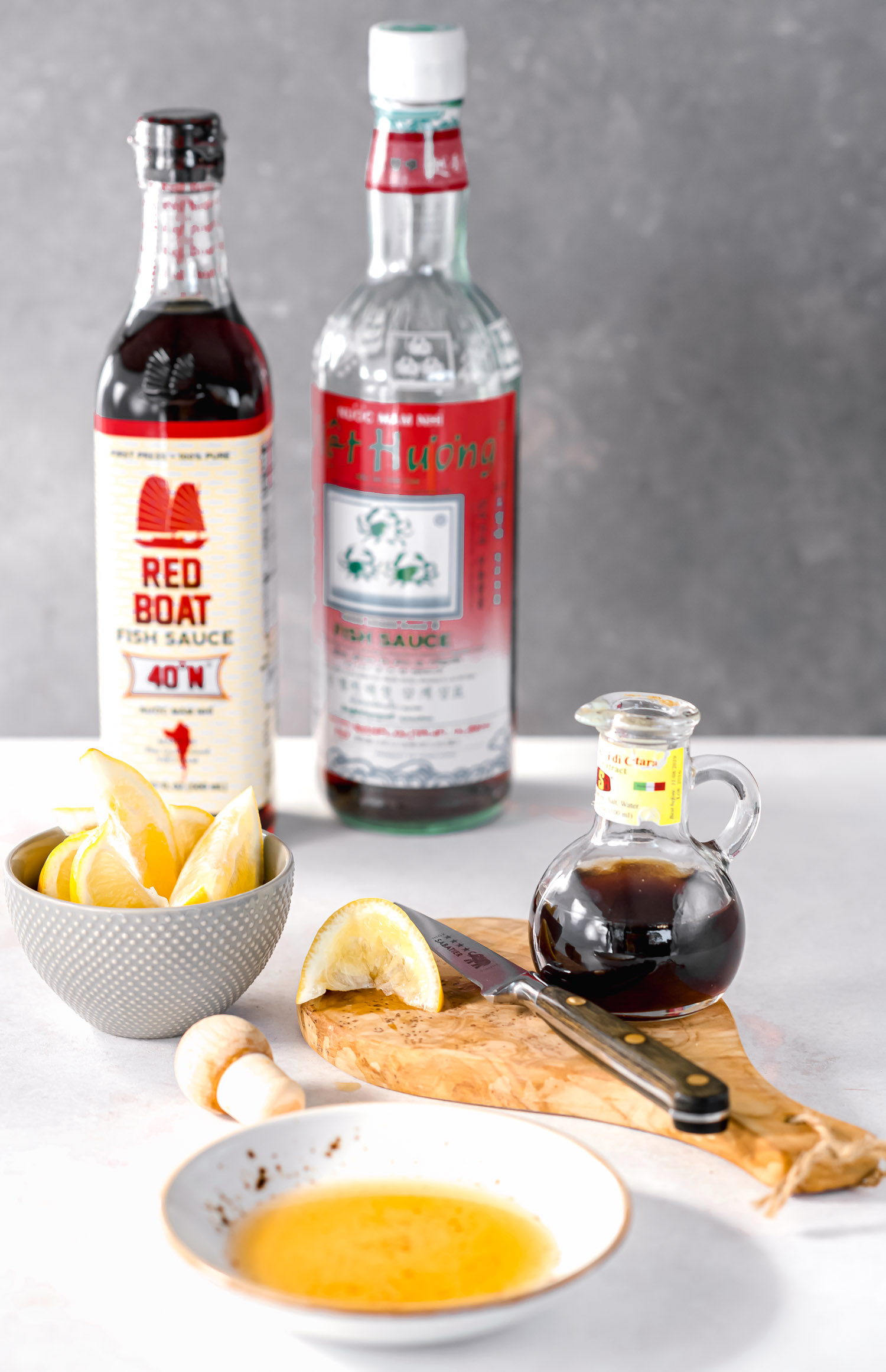