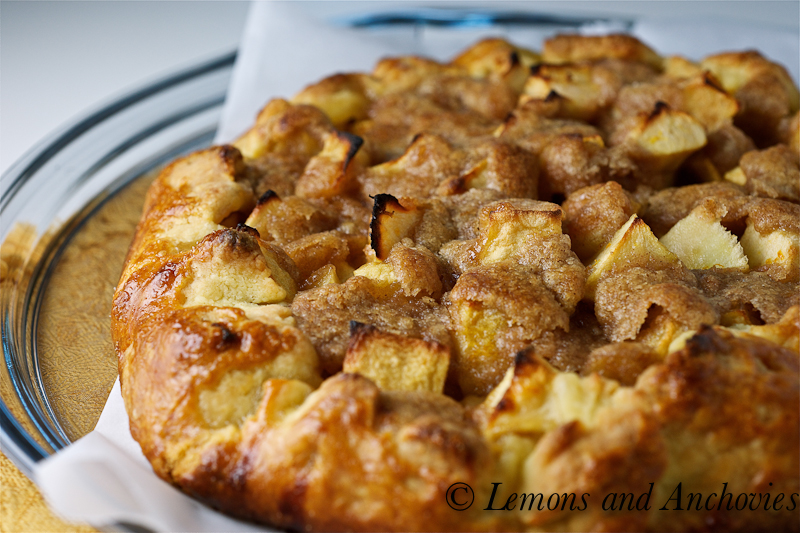 I made this over the weekend to take to a get-together with friends.  Since I had never made this before and knowing that I wouldn’t have a chance to taste it beforehand, I was mildly anxious about presenting an untested recipe so I strongly considered leaving it behind.  In the end, I quickly took a picture and decided to trust Ina Garten’s excellent track record, as well as our good friends’ insouciance and never-failing graciousness in the event that the first bites all around the table would not be pleasing. Fortunately, the crostata seemed to be well-received and has already garnered a request for a second appearance from my husband.

A crostata is the Italian version of a free-form tart, what the French call a galette.  It’s usually made with sweet/fruit fillings but I imagine that one filled with mushrooms or spinach would be an equally appealing savory version.  Aside from the one hour chill time for the dough, the prep was quite simple.  Galettes, or crostatas in this case, seem so much more manageable than pies even though both require essentially the same steps.  For the party, this crostata won because I had all the ingredients at hand.

This Ina Garten recipe was particularly easy and turned out great.  The only departure from the original instructions was that I brushed the dough with egg wash to achieve the nice golden crust that you see here.   Speaking of the crust, it was perfectly flaky and since the filling was a simple mix of chopped apples with orange zest topped with a cinnamon/allspice/butter crumble, the bottom was not soggy.  The crostata had just the right amount of sweetness, allowing the natural sugar of the apples to shine through.  This was served at room temperature but next time, I’ll dig into it warm with a huge scoop of vanilla ice cream.

Pastry.  Using a food processor fitted with steel blade, pulse the flour, sugar, and salt a few times until combined.  Add the butter and pulse until the butter is the size of peas, about 12-15 times.  With the processor on, add the ice water all at once through the feed tube.  Pulse to combine, stopping just before the dough becomes a solid mass.  Turn the dough onto a floured board and form into a disk.  Wrap with plastic and refrigerate for at least an hour.

Roll the pastry into an 11-inch circle (on a lightly-floured surface) using a floured rolling pin.  Transfer to a baking sheet.  I used a silicone mat over the baking sheet.

Filling.  Peel, core and cut apples into 8ths then cut each wedge into three or four chunks.  Toss with the orange zest and place on top of the tart dough leaving a 1 1/2 border all around.

Crumb Topping.  Combine the flour, sugar, salt, cinnamon and allspice in a food processor fitted with steel blade.  Add the butter and pulse until crumbly.  Pour into a bowl and rub with with your fingers until the mixture starts holding together.  Sprinkle evenly on the apples. Carefully fold the border over the fruit mixture, pleating to make a circle.

Brush the exposed tart dough with the egg wash.

Bake the crostata for 20 – 25 minutes, until the crust is golden and the apples are tender.  Allow to cool.  Serve warm or at room temperature.